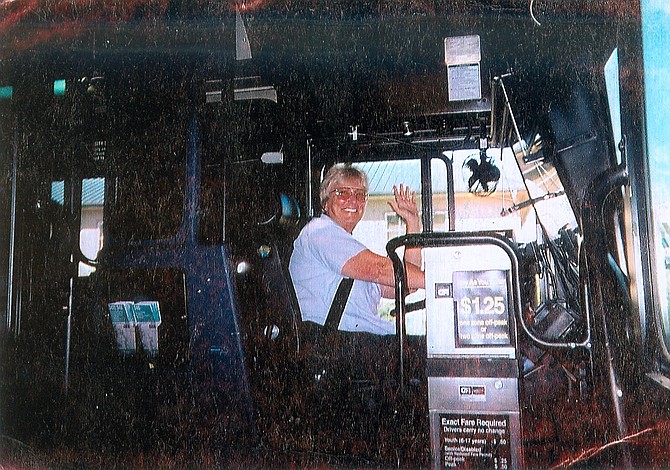 April in a Seattle bus.

A chill runs down my spine when the seasonal temperature drops. I automatically search the sky for signs of ballooning clouds—a nervous response, like a doctor’s knee-jerk test; whack—kick, whack—kick. An unconscious instinct I had developed driving Metro buses twenty-seven adventurous winters. Seattle’s long, gray, rainy season would immobilize traffic during an unexpected snowfall. City hills, slopes, and inclines, turned into icy rollercoaster mountains, requiring a non-stop drive to the top, and careful steering in slow-motion descent. Now retired, frozen memories thaw while I search for a warmer sweater, cuddle under a blanket, and hold a hot cup of coffee. I stopped wishing for a white Christmas many years ago.

I’ll never forget December 18, 1990. I was driving an articulated coach—sixty feet long, bending like an accordion bellows near the middle—at times the back end swung with the enthusiasm of a catwalk model’s hips. The route was continually busy, with zones serving a variety of schools and businesses, from Ballard to the south end. Trips were crowded with little standing room, containing a blur of attitudes from smart-mouthed teenagers to slow moving senior citizens doing their best—counting change out loud, slowly dropping one-coin-at-a-time into the fare box. Some days felt like Ted Mack’s Amateur Hour, watching a variety of ad-libbed performances. I could only daydream I had a long hook to remove bad actors from the bus.

Snow began falling around two o’clock that cold afternoon when I stopped at the south end layover. Due to the overload, most of my rest-break was erased. I had enough time to rush into the women’s room, then get coffee and a snack for the north end layover in a residential neighborhood.

Snowfall began to stick on the street. My foot thumped involuntarily at the sight of flakes falling. More than once on icy roads, I had experienced the heart-pounding sensation of sliding sideways down a Seattle hill. Passengers’ screams were followed by relieved cheers as I coasted safely to stop at the bottom of a hill; a steering-feat as I released clinched fingers, watching blood return to white-knuckles regaining their natural color.

A never-let-them-see-you-sweat driver, I watched snowflakes that seemed as big as plates fall onto the road. In less than a half-hour, the bus rear end was swinging like a diver ready to jack-knife into a snowdrift. As I slid into the zone at 23rd and Jackson, I was unable to exit with madly spinning tires—the bus was going nowhere. An all-call on the radio announced the system was overloaded. The words, “Don’t call unless it is an emergency,” meant the bus would stay parked until a maintenance truck arrived to put on chains. Passengers exited, going in every direction. Within a few steps, they were blanketed in billowing snowflakes, covered in a frozen shroud of snow.

Hours alone with a newspaper, doing the crossword puzzles, drinking stale, cold coffee, and finishing a few small snacks, I watched snow blow, whirling into deep piles. Wind-blown, ice-crusted people struggled in the deepening drifts as they walked near the bus. I opened the front door, inviting everyone passing by to step aboard to warm-up. I sat in the driver’s seat, having enthusiastic conversations, including with a few people I would have been worried to pick up on a regular day. The swirling snow made us all equals, providing friendly moments of humanity as we thawed out. People seemed extra frisky from experiencing the unusual snowstorm.