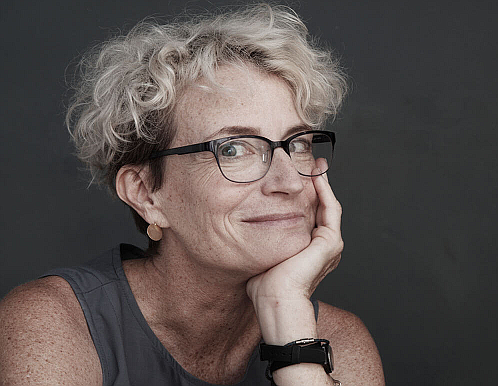 From childhood on, we’re barraged by messages that it’s sad to be old, that wrinkles are embarrassing and that old people are useless. Ashton Applewhite believed them, until she realized where this prejudice comes from and the damage it does.

Her book, This Chair Rocks: A Manifesto Against Ageism (on sale March 5) has been called lively, funny and deeply researched. It traces Applewhite’s journey from apprehensive boomer to pro-aging radical, and in the process debunks myth after myth about late life. She explains the roots of ageism in history and critiques the portrayal of ‘olders’ as burdens to society. She examines ageism from the workplace to the bedroom, and describes what an all-age-friendly world would look like. She concludes with a rousing call to action.

“I didn’t set out to become a writer” (or an activist), says Applewhite. “I went into publishing because I loved to read and didn’t have any better ideas.” Under the name Blanche Knott, she wrote a joke collection that turned into the best-selling paperback of 1982 and became a clue on Jeopardy: (“Who is the author of Truly Tasteless Jokes?”) Her first serious book, Cutting Loose: Why Women Who End Their Marriages Do So Well, was published in 1997.

Applewhite first began studying aging because she was afraid of getting older, but soon realized that most of what she thought was wrong. She then began examining the question of why society’s views on late life is so grim when the reality is so different. In fact, it turns out that people are happiest at the beginnings and the end of their lives. “I began blogging about aging and ageism in 2007, and started speaking on the subject in 2012,” writes Applewhite. In 2017 she received a standing ovation for her TED talk about ageism (www.ted.com/talks/ashton_applewhite_ let_s_end_ageism).

“What’s one thing that every person in this room is going to become? Older,” she said in her TED talk. “And most of us are scared stiff at the prospect…I used to feel the same way. What was I most worried about? Ending up drooling in some grim institutional hallway. And then I learned that only four percent of older Americans are living in nursing homes, and the percentage is dropping. What else was I worried about? Dementia. Turns out that most of us can think just fine to the end. Dementia rates are dropping, too. The real epidemic is anxiety over memory loss.

“I also figured that old people were depressed because they were old and they were going to die soon. It turns out that the longer people live, the less they fear dying (in fact, people grow happier as they grow older)… So I started feeling a lot better about getting older, and I started obsessing about why so few people know these things. The reason is ageism: discrimination and stereotyping on the basis of age.”

Applewhite reflected that the strange thing about ageism is that it feeds on denial – our reluctance to acknowledge that we are going to become that older person. “It’s denial when we try to pass for younger or when we believe in anti-aging products, or when we feel like our bodies are betraying us, simply because they are changing. Why on earth do we stop celebrating the ability to adapt and grow as we move through life? Why should aging well mean struggling to look and move like younger versions of ourselves? It’s embarrassing to be called out as older until we quit being embarrassed about it, and it’s not healthy to go through life dreading our futures. The sooner we get off this hamster wheel of age denial, the better off we are,” says Applewhite.

“Aging is not a problem to be fixed or a disease to be cured. It is a natural, powerful, lifelong process that unites us all.”

She concluded her talk by saying, “Longevity is here to stay. A movement to end ageism is underway. I’m in it, and I hope you will join me.”

Applewhite notes that ageism silences older people; that’s why she’s written her most recent book and why she blogs about the subject. She has also developed www.oldschool.info, a clearinghouse of anti-ageism resources. “I am also the voice of yoisthisageist.com. And I speak widely.” She views her activities as tools to help catalyze a movement to make discrimination on the basis of age as unacceptable as any other kind of discrimination. “Ageism makes growing older harder than it has to be,” said Applewhite. “It damages our sense of self, segregates us, diminishes our prospects and actually shortens lives.” She believes that gaining awareness of ageist behaviors, integrating with people of all ages and activism against ageist attitudes are the best antidotes. Age on!