Enchant Christmas at T-Mobile Park Is a Delightful Experience, Especially If You’re a Young Child 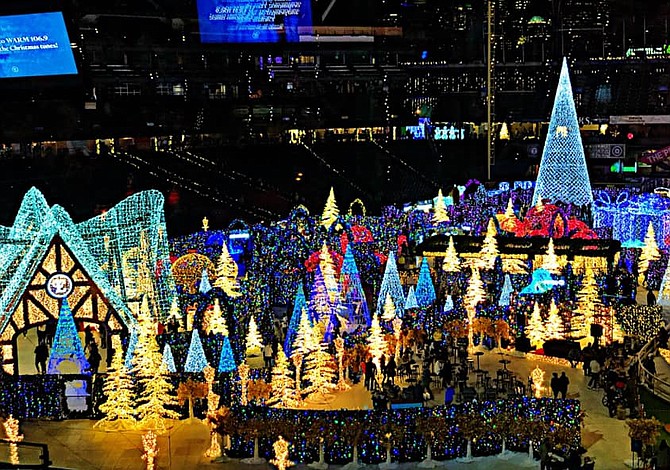 Enchant Christmas is at T-Mobile Park again this year. It’s billed as the World’s Largest Christmas Maze and Market. Since my kids are grown and I’m not much of a shopper, I no longer have a great deal of experience in either area. Still, I did make it through the early evening traffic last Tuesday to get a firsthand perspective of the Enchanted Christmas experience.

I admit that the company that puts these in three locations around the country really knows how to do Christmas lights. Their displays make Bellevue’s Snowflake Lane look amateurish. Then, again, Snowflake Lane is free, and a family of four could easily spend a couple hundred dollars at Enchant. However, if you’re a parent or grandparent, this is an experience that young kids will never forget.

Both the infield and outfield of T-Mobile Park are filled with enormous lighted structures that must appear even more gigantic to small children. The nice thing is that all of the displays are spread out over such a large area that a person does not feel crowded or claustrophobic at any time. People are constantly moving from one spot to another, phones in hand taking picture after picture of themselves and each other.

In fact, Enchant may be the ultimate selfie experience. Just watch out for the folks looking at their phones because they are not watching out for you or anyone else.

I found the most interesting element of Enchant to be the ice skating path. Not skating, but standing on the rail watching small kids attempting to move forward with the help of their parents (mostly dads). There were a lot of what we used to refer to as “Kodak moments” happening on that ice track as well as everywhere else throughout Enchant.

All in all, Enchant is a place to create lasting memories, especially for young children. It’s pricy but unique and something that could easily become a seasonal tradition for many families.