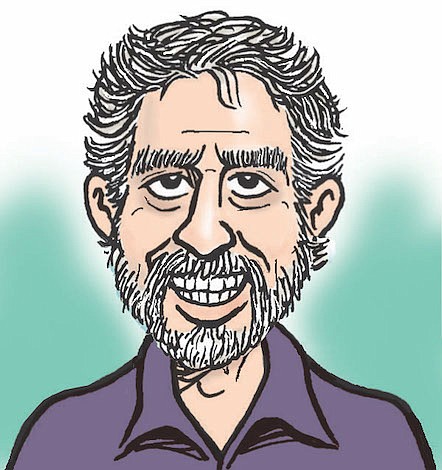 Steven Greenberg spent his career as an editorial (political) cartoonist, but since 2011 he has also drawn a monthly comic strip for the 50-and-up crowd, Boomerish. Steven's main job is laying out newspaper pages for a suburban division of the Los Angeles Times. He lives in Southern California, where he was born and raised, but from 1986 to early 2000 he was on staff at the Seattle Post-Intelligencer, where he worked in the art department and shared editorial cartooning duties with David Horsey. “As a teen I had thoughts of doing comic books, but in college I got completely hooked on editorial cartooning; to me that was artistically exciting, endlessly varied, great fun and very personally expressive. Writing Boomerish has been great fun, and I try to keep finding some different aspect of life to deal with each time (food, health, memory, personal values, inter-generational issues, music, etc.).” His goal has been to do a really good comic strip that happens to be about Boomer generation life but keeping it fun and snarky and readable to other ages. Inspirations for the strips often come from his own experiences or his observations of friends, family and random strangers, and the main characters are composites of him and other people he’s known.