“The Curious Incident of the Dog in the Night-Time”; A Masterfully Staged and Acted Show That Keeps the Audience Guessing 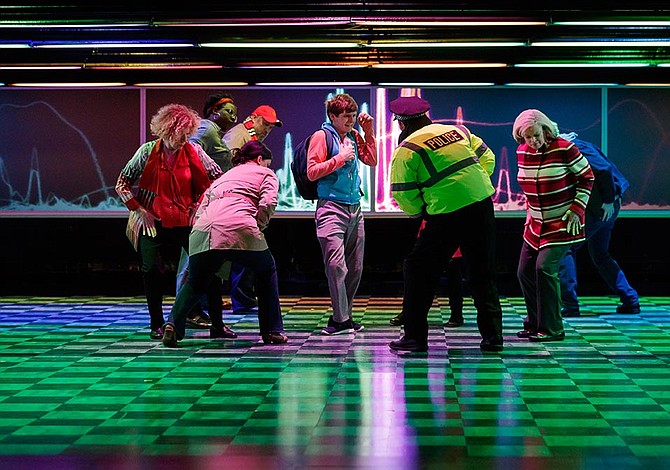 Village Theatre’s production of the award-winning The Curious Incident of the Dog in the Night-Time presents an epic story loosely based on the novel of the same name. Village Theatre’s interpretation is highly stylized and sometimes confusing, especially if one has not read the synopsis in advance.

“When 15-year-old Christopher is wrongfully accused of murdering his neighbor’s dog, he sets off to solve the mystery and prove his innocence. Equipped with an extraordinary brain, but hampered by a strong distrust of strangers and a personal struggle to interpret everyday life, this adventure will turn his life upside-down – while giving the audience an intimate look at the world through his eyes. “

Masterfully acted and staged, the show presents a vision of the world through the eyes of Christopher who has an undisclosed condition resembling autism. Within this perspective, the audience is taken on an investigative journey into who committed the crime of killing the neighbor’s dog and what really happened to Christopher’s mother.

As the hero of the show, Christopher must step beyond his fears and travel alone to London on a train to see if he can find his mother. This is no easy task for a boy with a condition, and the show’s staging takes every member of the audience along for the uncomfortable, sometimes freightening adventure.

The plot is simple enough, but it needs to be made real by Christopher as masterfully portrayed by Michael Krenning, a Village Theatre veteran. Krenning manages to take everyone on this hero’s journey of discovery, both outer and inner, in a way that keeps people involved from beginning to the final victorious scene.

All in all, The Curious Incident of the Dog In the Night-Time is a captivating show that leaves the audience with much to discuss on the ride home. It continues at the Village Theatre through April 21 before moving the Everett Performing Arts Center where it will run from April 26 through May 19.