What Dogs Tell Us About Longevity

UW scientists investigate how to slow down the aging process 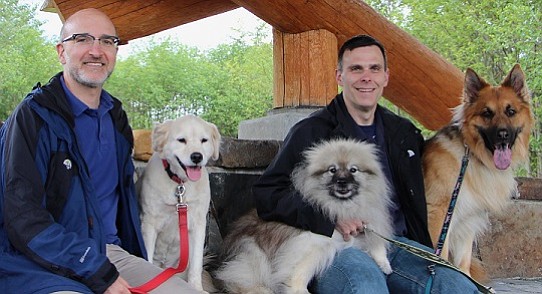 Drs. Daniel Promislow and Matt Kaeberlein, with Frisbee, Chloe and Dobby, are professors at the University of Washington and directors of the Dog Aging Project, which is dedicated to improving healthy longevity in dogs (and humans). Photo by Tammi Kaeberlein

How did Promislow and Kaeberlein come together to develop the Dog Aging Project?

“The idea for the Dog Aging Project was first conceived of three-and-a-half years ago over the course of about six months,” explains Kaeberlein. “When Daniel and I started talking, that’s when it really took off. He had already received a small grant from the National Institutes of Health to create networking groups to discuss the idea of using dogs as a model for aging.”

Part of the reasoning for using dogs to study aging is that what takes decades to study in humans will take only years to study in dogs. Dogs and humans share the same environment and share many of the same maladies of old age. Plus, the healthcare system for dogs throughout the country is second only to humans. “Dogs are a lot more like people than a mouse in a lab is,” says Promislow.

He recalls his work at the University of Georgia before moving to Seattle. “My background is in evolutionary genetics, and I have researched aging since grad school,” he says. Georgia has a great veterinarian school, where Dr. Kate Creevy was teaching. “She and I got ahold of a large data set on the age of death, breed, size and sex of dogs.” Their landmark study provided the first comprehensive look at causes of death in more than 80 breeds of dogs. They were contacted by the National Institutes of Health (NIH) to put together a planning grant to use dogs as a model of aging. “We started holding annual meetings right around the time that I moved to the University of Washington,” says Promislow, who grew up in Vancouver B.C. (‘a Northwesterner, born and bred’).

“Matt and I started talking about it, and he got excited about clinical trials that could increase the lifespan of dogs.”

“Daniel and I had a series of conversations,” explains Kaeberlein. “I was fascinated with the longitudinal side of the project that Daniel was working on. But what I got most excited about was taking it a step further…not just learn about aging in dogs, but to actually do something about it—target the aging process directly. That was the big ‘aha’ moment for me.” 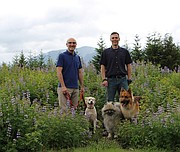 Their two projects—one a longitudinal study of aging in dogs to understand how genetics and the environment impact the aging process, the other a series of intervention trials aimed at preventing disease and extending the healthy longevity in dogs—together form the Dog Aging Project.

“We’ve been analyzing existing data sets, and now we’re excited to develop our own,” says Promislow, who is in the process of submitting a grant proposal to fund a large-scale study, which would be the first comprehensive, detailed study of aging in dogs. “Lifespan is affected by hundreds of genes and environmental factors. “To understand how, you need to study a population in which genes, environment and aging rate all vary,” says Promislow. The new study, which aims to enroll 10,000 pet dogs from across the country, will do just that. “I am really excited about studying what influences whether a dog will be a healthy ager or not,” he adds.