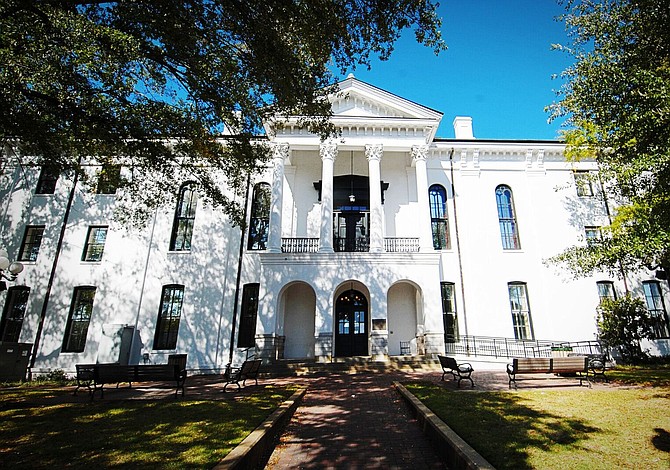 The grounds contain several outbuildings, including a barn, stable, servants’ quarters and smokehouse. The landscape is lush with gardens, arbors and a cedar walkway. The trees lining the path were planted after the yellow fever epidemic that swept the South. It was believed that cedars “cleansed” the air.

Faulkner fans will also want to stop by St. Peter’s Cemetery, where the graves of William and Estelle are located, along with the family plot. Visitors occasionally bring small bottles of bourbon to pour near Faulkner’s grave, as the author was known to favor his libations. Contrary to public opinion, he never drank and wrote, explaining that the only thing he could do when he was drinking was to be a drunk. You’ll see empty bottles and often several pens and pencils, as well as pennies (perhaps as a nod to the adage, “a penny for your thoughts”) lying atop his gravestone.

If you’re inspired to read one of Faulkner’s novels after your visit to Rowan Oak and St. Peter’s Cemetery, head to Square Books, the iconic and beloved independent bookstore in town. An entire area is devoted to the author and his works. Another section of the store specifically focuses on other Oxford and Mississippi literary greats, of which there are many. The prolific number reflects a rich tradition of storytelling that is deeply valued in this region. If you have questions, need recommendations or are interested in signed copies of books, the shop’s friendly and knowledgeable staff are happy to assist. While you browse, grab a cup of java at the café upstairs and take it out on the porch for a nice view of the Square.

When you’re ready to move from this comfy spot, make your way to the Oxford Visitor Center and pick up a Walking Tours guide to use as your companion as you stroll around the charming historic district. You’ll discover trendy restaurants and cafes, along with unique boutiques and galleries that make their home in this vibrant downtown. Note the impressive number of buildings listed on the National Register of Historic Places. The Square itself is a National Historic Landmark, with the Oxford Courthouse as its anchor. This Italianate masterpiece replaces the 1840 structure, which was destroyed along with all but one of the buildings around the Square by Union troops in 1864.

A variety of architectural styles are present in town, including Greek Revival, Victorian Gothic, Italianate, Gothic Revival, Romanesque Revival and others. Make sure to check out City Hall, formerly the Federal Building and Post Office. Originally constructed in 1885 in the Romanesque Revival style, it is a handsome red brick structure with intricate detail and decorative work. A bronze statue of Faulkner sitting on a park bench outside the building is a popular attraction for literary enthusiasts. Nearby, a sign explains a bit of the town’s history, noting that it was named after the British university city of Oxford in hopes of having the state university located there, which it did successfully attract. A red, London-style telephone booth stands at the corner to complete the picture. And to top it off, the city even bought several red double-decker buses, which are used as transportation for special events and private occasions.