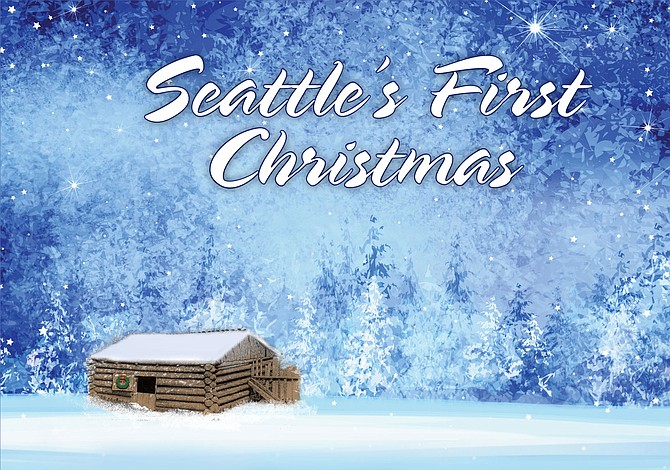 The cabin in this image is based on an early sketch of Arthur Denny's cabin at Alki Point, courtesy PEMCO Webster & Stevens Collection, Museum of History & Industry, Seattle; All Rights Reserved

Nineteen-year-old David Denny and John Low had walked from the Willamette Valley in Oregon to select a place for settlement on Puget Sound, finally deciding on the point of land known to the local Natives as “Smaquamox” for their venture.

John Low took the long trail back to Oregon to bring the pioneer families, taking with him a note from David to his brother, Arthur Denny, the pioneers’ leader. The note said they had found "the place" and to come. The landing of the Denny party on November 13, 1851 was in answer to that note.

David, an accomplished woodsman, had expected to build log cabins to house them when they arrived, but had only erected the four walls of the first one when his axe slipped and he cut a deep gash in his foot. When the party arrived on the beach, they were dismayed to find David terribly ill and shaking with fever and not even one completed dwelling to move into. There were 24 people to shelter in one small, unroofed building. That was in the middle of November.

On Christmas Day, along with that structure – now snugly roofed – there was another, larger log house and two homes built of split-cedar boards patterned after the dwellings of the local Indians. Arthur and Mary Anne Denny and their three children, Arthur's brother David and Mary Anne’s sister Louisa Boren lived in the larger log house. The smaller log structure housed Carson and Mary Boren and their baby daughter. John and Lydia Low, with their four children, and William and Sarah Anne Bell, with their four, occupied the two split-cedar dwellings. Charles and Lee Terry were sort of revolving guests, first living in one home and then in another. These 24 hardy souls were the entire population of the settlers’ little village on that first Christmas.

Since Arthur and Mary Anne Denny's house was the largest, Christmas was celebrated there, with each member of the party helping with the preparations. Louisa Boren led the children into the forest to gather cedar boughs to use as decorations. They cut armfuls of Oregon grape branches, that Northwest native shrub whose stickery leaves were like the holly of their earlier home in Cherry Grove, Illinois. They fashioned a wreath for the door from the Oregon grape, and Louisa used her own red hair-ribbon to make a festive bow.

The other women cooked the feast, to which Samuel Maple and Henry Van Asselt, two bachelors from the Collins settlement on the Duwamish, were invited guests. David Denny, now well and strong, provided them with the main course, two wild geese. There were salmon and wild potatoes purchased from the Indians. Pies were made from the few dried apples remaining in their kitchens. There was a small amount of tea for the elders, and the children drank clam juice, though they sorely missed the milk they could no longer have since the settlement had no cow.

There had been a flurry of washing and mending and the whole company was spruce and clean. Even their shoes, which had been worn to the point of having paper or cardboard liners, had been cobbled, so they were well-shod. It was a far different-looking group than it had been just a few weeks earlier. Before they had started their westward journey along the Oregon Trail, Louisa Boren, with her wonderful gift of forethought, remembered that there would be a Christmas to celebrate in their new home. She had secretly tucked in, among her own belongings, small toys and trinkets to surprise and delight the children on the special day.

There was good food and family and friends with whom to share it in this new wilderness home they had come so far, and through so many hardships, to find. It was a truly joyous Christmas that December 25 of 1851.

Dorothea Nordstrand’s story is based on her wide reading in Seattle’s early history. Her book about growing up in Seattle – “Pork Neck Bones, Sauerkraut and Rutabagas: Memories of My Green Lake Girlhood” – is available by inquiring at 7428EGL@gmail.com.