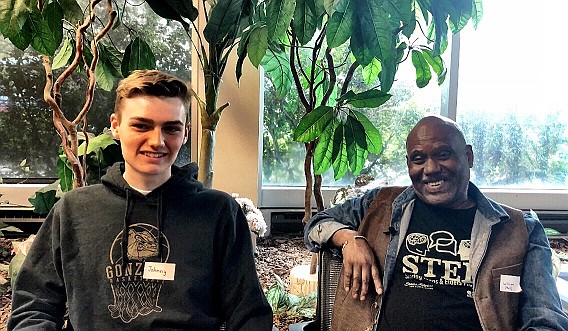 On a Saturday morning at the Olympia Senior Center, Linda Terry, the founder of Sharing Teens and Elders Project (STEP) is welcoming long-time and new participants for the day’s events. Committed volunteers are putting out snacks and coffee, while sneaking in praises for Linda’s unwavering dedication to bridge generations and foster a bond between elders and a caring group of local teens.

STEP, well into its fifth year, is a perfect example of intergenerational engagement and the primary reason why the program is featured as an “Inspiring Community Connection” in the 2018 edition of AARP’s Where We Live: A Community for All Ages. The 3rd edition in the AARP series highlights inspiring ideas and solutions from America’s local leaders to improve their communities, respond to pressing issues and build relationships. STEP has also been honored as a Program of Distinction by Generations United, dedicated to improving lives through intergenerational collaboration.

“The program has evolved beyond my original vision,” said Linda. “When we started, the gatherings were pretty structured with group activities, but as we progressed, both teens and elders expressed a desire to just talk and share stories.”

A myriad of studies tout the benefits of intergenerational interactions for older adults as a way to decrease loneliness and isolation, a chronic and increasing phenomenon that has a marked effect on health and well-being. Older adults with opportunities for intergenerational connection report less depression, better physical health and higher degrees of life satisfaction.

What people may not know is that our younger generation is experiencing loneliness at a higher rate than older generations. A Cigna survey reported that Generation Z, born between the mid-1990s and early 2000s, have the highest score of loneliness on the UCLA loneliness scale. People scoring 43 and above are considered lonely. Generation Z had an overall score of 48.3. By comparison, baby boomers scored 42.4 and the Greatest Generation had a score of 38.6.

For teen participants, interacting with older adults is a way to disrupt the pre-conceived notions of aging. These monthly conversations allow for personal narratives of historic moments: a time when men first landed on the moon; the rise of the civil rights movement; women’s empowerment. For some, it is about connecting current interests and broadening horizons.

Johnny LaBranche, an 18-year-old, sits with elder Bill Carey. They have more in common than meets the eye, namely outdoor adventures. Johnny loves the challenges of rock climbing and Bill has spent years as a whitewater river guide. A high school senior, Johnny originally joined the group to meet academic requirements, but he kept returning, making friends with the elders and other teens in his time with the program. Even those who have gone off to college return during breaks to catch up with participants.

Linda also provides space and a small stipend for young musicians to practice their art. This Saturday morning, two students are performing during the opening session and then join the conversation. The opportunity to play in front of an audience has brought some musicians back for more. That is the case for Clio, a 14-year old guitarist and student at Olympia High. During her performance the month before, she was chatting with Bill about musical influences. Not only did Bill encourage her to pursue her passion, he sent her away with a list of recommended artists like jazz guitarist Wes Montgomery and “The First Lady of Song” Ella Fitzgerald.

There is no doubt that these conversations are having a positive impact on the entire group. The older adults consistently remark about a renewed hope for the future that these young adults inspire.

American cultural anthropologist Margaret Mead once said, “Connections between generations are essential for the mental health and stability of a nation.” Olympia’s STEP project and Linda’s leadership provide a real-life example of the benefits of bringing generations together for the betterment of all.