Long and green and good for you 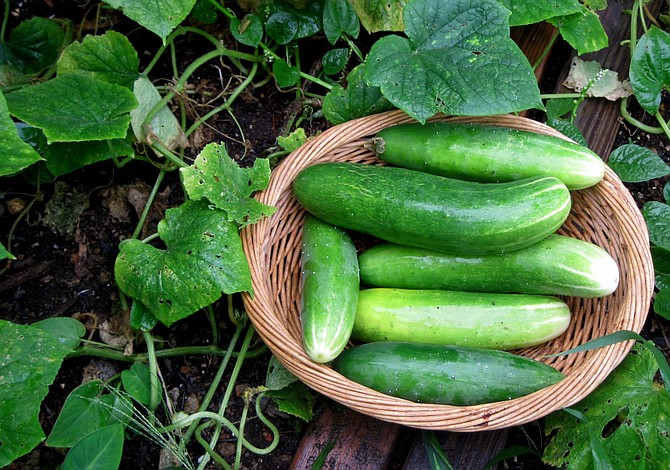 An abundance of cucumbers this time of year will bring a fresh joy to your table.

Cucumbers and zucchini have started showing up in the most unusual places. There is a big pile in the break room at work, with a sign pleading, “Take some, please.” The other day, a pile appeared next to my neighbor’s mailbox. Last night when I got home, I found three anonymous zucchinis on the front porch—sort of like finding an abandoned baby on the doorstep.

So how can you take advantage of these abundant summer vegetables?

Since local lettuce is past its prime, try cucumbers and zucchini in salads made for hot days. Greek salads are usually high in salt—something we all need to avoid—due to olives and feta cheese. So keep the inspiration but vary the ingredients for a healthy alternative. A good goal is to aim for less than 2,000 milligrams of sodium (salt) per day.

Try this recipe for a low-salt, cooling cucumber or zucchini salad. Then prolong the flavor of summer well into the dark months of winter with easy, salt-free pickles.

1-2 cucumbers or zucchini (about 3 cups), peeled

Chop cucumber or zucchini and tomato. Mix all ingredients, chill about a half hour. Great served with barbecued chicken or flank steak.

Northwest Kidney Centers patient Chuck Minger adapted this recipe from one he found on the Internet. He was so impressed with the pickles, which don’t need to be canned, that he gave them as gifts.

The information in this column is meant for people who want to keep their kidneys healthy and blood pressure down by following a low-sodium diet. In most cases, except for dialysis patients, a diet high in potassium is thought to help lower high blood pressure. These recipes are not intended for people on dialysis without the supervision of a registered dietitian.

[Katy G. Wilkens is a registered dietitian and department head at Northwest Kidney Centers. A recipient of the Susan Knapp Excellence in Education Award from the National Kidney Foundation Council on Renal Nutrition, she has a Master of Science degree in nutritional sciences from the University of Washington. See more recipes at www.nwkidney.org.]