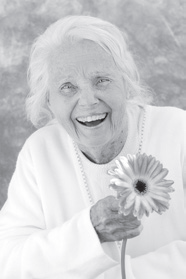 What do centenarians make as their New Year’s resolutions?

What do centenarians make as their New Year’s resolutions? According to a survey of 100-year-olds living in retirement communities, they plan to eat and drink well, save, love and be healthy.

“One-hundred-year-olds have made and either kept or broken more resolutions than anyone on the planet,” said Jamison Gosselin of Holiday Retirement Communities, where the survey was conducted. So why not ask the experts?

Several centenarians swear they have lived as long as they have thanks to eating and drinking the finest. Gretta Clark, a 103-year-old from Fort Gratiot, Mich., says the key to a long life is to “eat dark chocolate and give lots of hugs.”

One in five centenarians say you should spend more time with your spouse, but six percent say spending less time together leads to a happy marriage.

Lola Brey, a 100-year-old from Billings, Mont., plans to stay ornery and stubborn. She says it led to her longevity.

Spend less. Save more. One in four centenarians say they regret not starting to save money at an earlier age. Centenarians also think adults today will most regret spending too much money (15 percent), followed by not saving enough money (13 percent).

Do what you can, when you can, how you can, for as long as you can. This year, Vivian Hamilton, a 100-year-old from Sherman, Texas, vows to keep that resolution.

Get to the gym. Nearly 9 in 10 centenarians say that physical activity has contributed to their health and happiness.

Be nicer. Kay Wood, a 102-year-old from Ocala, Fla., says her resolution is “to just be nice to people.”

Make it through the year. Keep it simple. Follow 101-year-old, Grace Currie’s lead. The Surprise, Arizona, resident resolves that this year she will “live to be 102.”

And then there are those who may be the wisest of all, who say go sans resolutions. Dorris Weller, a 100-year-old from Sherman, Texas, does not plan to make a resolution. She says, “It’s worked for 100 years, so just keep moving every day.” Jeunette Nelson, a 102-year-old from Spokane, Washington, plans to stick to her motto, “Just live from day to day. Take one day at a time, and enjoy it the best you can.”

These recommendations were pulled from a nationwide survey by www.holidaytouch.com of 100-year-olds, as well as individual interviews with centenarians across the country. It is from a report, 100 Years of Wisdom: The Perspective of Centenarians (www.100yearsofwisdom.com).