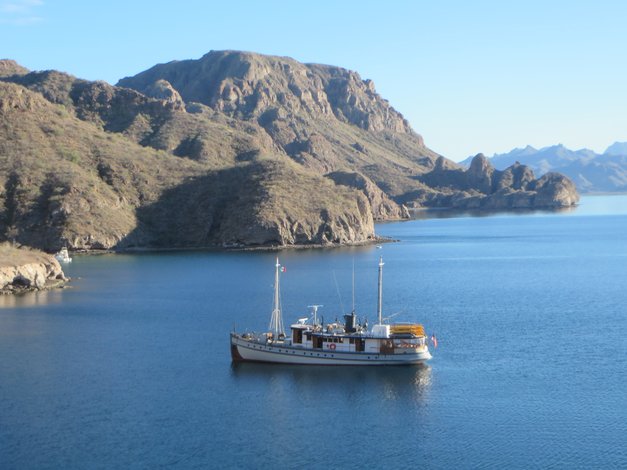 Explore Baja with a cruise on the historic M/V Westward. Photo by Deborah Stone

The Westward is still powered by her original Atlas engine and is listed with the U.S. National Register of Historic Places for her contributions to maritime history. It has recently been completely upgraded and renovated with an eye to preserving the style and décor of its bygone roots. The vessel is very comfortable, with four staterooms, each containing a double and a single bunk, settee, sink, toilet, shower and closet. Though small, the cabins are cozy and contain the basic necessities. The rest of the boat consists of a salon, dining area, kitchen, outside deck, engine room, wheelhouse and crew quarters, which are located down below.

Trips either begin in La Paz and end in Loreto or go in the reverse direction, but the exact itinerary of specific stops along the way can fluctuate, depending on weather conditions, interests of the passengers, wildlife observation opportunities and other factors. The crew’s mantra regarding this aspect of flexibility is simply, “It’s the plan until it changes.” With that attitude, it’s easy to adapt to whatever situation arises. And with its small capacity, the boat can enter areas that larger crafts cannot, allowing passengers to explore hidden locales in great depth.

The Sea of Cortez is often referred to as the "aquarium of the world" for its rich sea life. Photo by Deborah Stone

During the day, you’ll spend time viewing the many species of birds and sea creatures from the boat’s deck. It’s very common to see a pod of bottlenose dolphins racing alongside the vessel or soaring mobula rays jumping out of the water and putting on an astonishing aerobatic display, only to land with a loud bang as they belly-flop back into the sea. Frigatebirds, Great Blue Herons, Heermman’s Gulls, Grebes, Petrels, Hawks, and countless number of birds grace the skies and the water. My head was spinning from looking in every direction at the magnificent array of wildlife. It’s no wonder this region is known as the “aquarium of the world” and has often been compared to the Galapagos Islands.

You’ll also visit pristine beaches on deserted islands, hike in the otherworldly landscape, kayak along picturesque shorelines and snorkel in the crystal clear waters amid schools of multi-colored fish. Activities are led by onboard naturalist Carlos Gajon, a personable La Paz native whose grasp of the regions, people history and ecosystem is encyclopedic. Carlos was key to our group’s understanding of the region and its unique ecosystems, and he never ceased to amaze us with his wealth of knowledge and fascinating stories. In addition, he is an accomplished kayaker and diver, often supplying the boat with fresh fish, clams and scallops, which later found their way to our plates at mealtime, courtesy of the superb talents of Chef Tracie Triolo.

Each evening or late afternoon, the boat would anchor at a different locale, typically in a secluded and protected bay. The idea is not to travel during the night, but rather the day, allowing passengers to fully experience the journey. And, in case you’re wondering about noise at night, rest assured the boat is quiet, as it has an electrical system that allows the captain to go twelve hours at anchor without running a generator. Under the starlit skies, it’s often so quiet that you’re able to hear the humpbacks thumping or “pec slapping,” along with the panting breaths of the sea turtles.