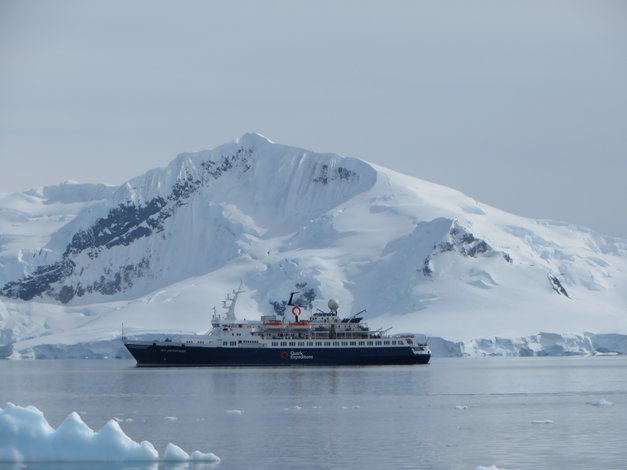 Antarctica is a pristine wonderland that goes far beyond expectations. Photo by Deborah Stone

Passengers are greeted by a welcome committee of penguins who parade around in their finest tuxes. Photo by Deborah Stone

I didn’t think the day could get any better as we witnessed a pod of magnificent Orcas gliding by our ship along with dozens of Painted Petrels riding the waves amid ice sculptures that could have been made by the likes of Michelangelo himself. But, it did as soon as we stepped foot on land and were greeted by a welcome committee of thousands of Adelie penguins dressed in their finest tuxes. The creatures paraded all around us as they headed to and from their nests on the rocks to the sea on a well-trafficked path, commonly referred to as the “penguin highway.” Most waddled in perfect linear formation, one after another, though occasionally a few would opt to slide down the hills in an effort to take a short cut to their destination. Consummate entertainers, they provided endless amusement and Kodak moments for their enthralled human audience.

For most people, Antarctica brings to mind a mysterious, isolated place of frigid temps and extreme conditions. It’s a land of superlatives, being the highest, coldest, windiest and surprisingly driest continent in the world with the largest wilderness area. Most of its 5.4 million square miles is a vast permanent ice sheet averaging 8,000 feet in thickness. It’s hard to imagine this reality though until you actually visit the place and discover a pristine wonderland that goes far beyond expectations.

The majority of expeditions to Antarctica depart from Ushuaia, Argentina, known as "the end of the world." Photo by Deborah Stone

Getting to the Great White Continent is an adventure in itself. The majority of travelers take an expedition cruise departing from Ushuaia, Argentina, known as “the end of the world” for its location at the extreme southern tip of South America. There are numerous companies offering such trips. I opted to book my cruise with Adventure Life because of its reputation in the industry for working with top polar voyage leaders, such as Quark Expeditions. On an eleven-day, introductory Antarctic Explorer cruise, Quark’s Sea Adventurer was my home away from home. The ship boasted a wide range of creature comforts for its 117 guests plus crew, including a variety of compact cabins, spacious, window-walled observation lounge, main dining room, bar, small library, mini boutique, several storage areas, ample open deck space and of course, the bridge, or navigational hub.

It takes two days to reach Antarctica from Ushuaia and involves crossing the infamous Drake Passage. This is the body of water between South American and Antarctica that serves as a connecting point between the Atlantic and Pacific Oceans. Frequented by icebergs and huge waves, and plagued by gale-force winds, this legendary passage can often be violent, chaotic and unpredictable. If Mother Nature is in a relatively calm mood, you’ll get to experience “The Drake Lake” with just a bit of rolling and pitching about – maybe only a one-Dramamine kind of day. If not, you’ll be at the mercy of “The Dreaded Drake,” where you’ll feel like you’re on a bucking bronco that threatens to fling you from the ship. For those really affected by the severity of the motion, the safest course of action is to remain prone in your bed. You won’t be able to read, watch videos or concentrate on much of anything except your appreciation for being in a stalwart, sea-worthy vessel with a veteran captain and crew…and for having access to the ship doctor’s arsenal of motion sickness medication. Rough seas are not fun for most folks. Just know there’s light at the end of the tunnel and this, too, will pass. The discomfort is well-worth the rewards.

During the cruise, the expedition team presents lectures on a variety of Antarctica-related topics. Photo by Deborah Stone

If the situation is manageable, take advantage of all the fascinating educational presentations given by the expedition team on their areas of expertise from marine biology and ornithology to geology and history. Spend time bundled up outside on the deck watching the albatross circling the ship, go up to the bridge and learn about the navigational equipment, visit the gift shop and get yourself some Antarctica-themed merchandise, eat lots of cookies in the lounge and get to know your fellow passengers. On my cruise, there were people from all over the world – a mini United Nations of sort – who were well-seasoned travelers. For many, Antarctica was their seventh and final continent. You’ll also be engaged in a variety of mandatory activities such as picking up your boots and parkas, learning about the environmental protocols for shore landings, participating in safety drills and vacuuming your outer clothing and equipment to prevent spreading any invasive species.

The 2-day crossing really serves to gain not only physical, but psychological distance, from civilization. You can’t really appreciate how far removed Antarctica is until you sit on a boat for two days with not much to view except steel gray rolling waves as far as the eye can see. And that makes it all the more incredible when you espy your first iceberg and get your first glimpse of terra firma. Then the excitement builds as gradually the ship is surrounded by more ice sculptures and jagged mountains covered with snow and glaciers, presenting a photo directly out of the pages of a National Geographic Magazine.

Visitors to the Great White Continent will find scenes of grandeur and magnificence, along with abundant marine life. The variety of ice will astound you and even more so when you learn that each kind has its own name. Passengers are provided with a glossary of terms in order to help them identify the different forms, ranging from anchor ice and bergy-bits to floe, growler and frazil. Of special note are the mammoth tabular bergs – flat-topped icebergs that are more or less parallel with the waterline. The glaciers, too, are impressive in size, and when calving occurs, the noise can be deafening. 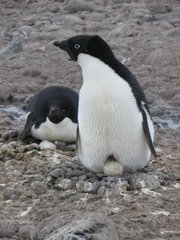 Penguins are the celebrities of Antarctica. Photo by Deborah Stone

As we cruised through the islands surrounding the Antarctica Peninsula, we settled into a routine that consisted of at least two excursions a day. Zodiacs or inflatable boats took us from the ship to land where we had time to wander around, watch the wildlife, take a hike and simply revel in the majestic scenery. The expedition team was always on hand to point out sensitive, off-limit areas, as well as to explain about the environment and the creatures inhabiting it. The penguins were the main attraction on these landings. They squawked and waddled, fetched rock after rock for their nests, splashed in the sea during their food forays and basically went about their business as usual without paying much attention to their human admirers. Like paparazzi, we followed them, cameras clicking away, as we attempted to capture every last comical pose. We never tired of watching and listening to these Antarctica celebrities. Most of the species we saw were either Adelie, Chinstrap or Gentoo penguins, and as it was December, they were still in the nesting stage. We were fortunate to spot one errant Macaroni penguin that seemed to have somehow gotten himself mixed in with the others. He stood out from the rest due to his bright yellow feathers on the top of his head.

On land, the penguins have no real predators. In the water, however, they can become fair game for seals, sea lions and whales. There are also certain birds, such as the skua, that will snatch the penguins’ eggs if they are exposed. We witnessed this on a few occasions and you had to admire these birds for their prowess and quick action. Along with the skua are other bird species that inhabit Antarctica including blue-eyed shags, Antarctic terns, kelp gulls, storm petrels, albatrosses, cormorants, snowy sheathbills and an assortment of geese and ducks.

There were only two of the landings that we made which had buildings of any sort on them. At Hope Bay, there’s the Argentinean Research Station and at Port Lockroy, there’s an extraordinary historical museum inside the old British Antarctic Survey hut. One room within the facility is also a post office and gift shop where you can purchase stamps, postcards and souvenirs. Mail sent from Port Lockroy can take from three weeks to three months to reach its final destination.

In addition to landings, we often took zodiac cruises along the coastline to get up an up close look at the ice bergs, bird rookeries and glaciers. Occasionally, we spotted seals sprawled across the glowing ice structures. Massive in size, they rarely moved from their frozen barcaloungers. And then there were the whales. Sometimes we were lucky to see them while in the zodiacs; other times, we intently observed them from the ship as they spouted or fed on large amounts of krill. These small crustaceans are abundant in Antarctic waters and virtually all of the animals in Antarctica are dependent on the enormous populations of krill for their food, directly or indirectly. When a large pod of humpbacks went by, it was akin to whales on parade – a magical Disney-like moment that felt unreal.

Hiking is a popular activity on many of the landings. Photo by Deborah Stone

Depending on the cruise itinerary, Quark offers other optional activities that passengers can choose to participate in such as a one-night campout on land, kayaking, cross-country skiing and even stand-up paddleboarding. There’s also the opportunity to do a polar plunge. I joined 50 brave folks for this challenge that involved jumping into the icy cold 28 degree water from off of the ship’s lowest deck. The shock to your system when your body makes contact with this freezing aquatic milieu is indescribable. The good thing is that you are quickly pulled out, given a shot of vodka and wrapped in a towel before the whole experience actually registers. Those who successfully accomplished this feat are given certificates attesting to their insanity and have eternal bragging rights.

Back on the ship, there’s no time to be bored. Quark values the educational component and the expedition team is passionate about sharing its wealth of knowledge about everything Antarctica. They are enthusiastic, fun and caring individuals that have a deep, abiding respect for this wondrous continent. In addition to the daily lectures, there are films, books about past explorations, maps, charts, photos and many resources for passengers to access. And, of course, there’s time to just try and soak it all in and treasure this dramatic place – the only spot on earth that is still as it should be, untamed and untouched.

Deborah Stone is a travel and lifestyle writer, who explores the globe in search of unique destinations and experiences to share with her readers. She’s an avid adventurer who welcomes new opportunities to increase awareness and enthusiasm for travel and cross-cultural connections. Her stories appear in a number of publications as well as on various travel websites. Additionally, she can be frequently be heard dishing travel with the hosts of the NPR-affiliated and AARP produced talk radio show, “2 Boomer Babes.” Deborah is a longtime Seattle area resident, who currently resides in Santa Fe, New Mexico.