Emil Martin standing by a WWII memorial in the South Pacific

I am now a 92-year-old veteran who remembers Civil War vets participating in July 4th parades down 1st Avenue in downtown Seattle in the late 1920s and early 30s, about 65 years after that war’s end. It is now 70 years after World War II, and there are still a few of us surviving WWII vets.

In April, with my son Terry and his wife MarieLouise, I was able to visit a battle site I was involved with over 70 years ago on the island of Peleliu, 500 miles east of the Philippines. In spite of General McArthur and Admiral Halsey advising against it, the Navy brass decided the island had to be taken. This was a battle that could have been skipped and wouldn’t have made any difference in the outcome of the war. 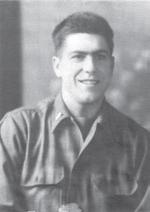 Our army and navy forces lost over 200 planes bombing and strafing the Palau Islands. On the day of our landing, we had a close-up view of the final bombardment by battleships and dive-bombers. The bombardment was impressive with massive explosions, flames, dust and smoke—we thought nothing could survive. Boy, were we mistaken. Hidden under the jungle canopy, there were one-and-a-half miles of caves and tunnels that the Japanese had been preparing for two years. Japanese troops and sailors survived in the caves by waiting out the bombardment. (Two years after the war, there were still 24 Japanese troops holed-up in the caves until a Japanese admiral was sent to let them know the war was over.)

Our bombardment knocked out all the visible targets, but gun emplacements in bunkers, pillboxes, caves and tunnels were unaffected. When the first Marines started landing, the Japanese let the troops have it with artillery and mortar shells.

What I remember most about the battle is that it was so hot and also the dead, decomposing bodies. There were clouds of flies everywhere. Every single man in our battalion had dysentery. Drinking water was contaminated and lots of guys passed out from heat exhaustion. During the middle of the battle, a typhoon hit the island and things were going horizontally—the fellow that I bunked with was hit on the head with a coconut tree, and it broke his back. I later read in the Reader’s Digest that two destroyers were capsized during the typhoon.

I was in an engineer combat battalion attached to the 81st division which landed on the adjacent island of Angaur. We were used as infantry for a few days and then as engineers, sealing cave entrances with satchel charges and bulldozers.

The Japanese fought nearly to the last man rather than surrender, and there were only 19 prisoners taken out of almost 11,000 defenders. Instead of the predicted four days to secure the island, the battle went on for nine weeks, day and night. In battle, the Japanese fought to the death, but during my nine months in the occupation of Japan, there wasn’t a single incident and they cooperated 100%. On my way to catch a ship back to the states, I saw the devastation in Tokyo, miles and miles of ashes. Five years ago on a visit to Tokyo, I saw wall-to-wall buildings – quite the transformation!