Bern is a city of superlatives 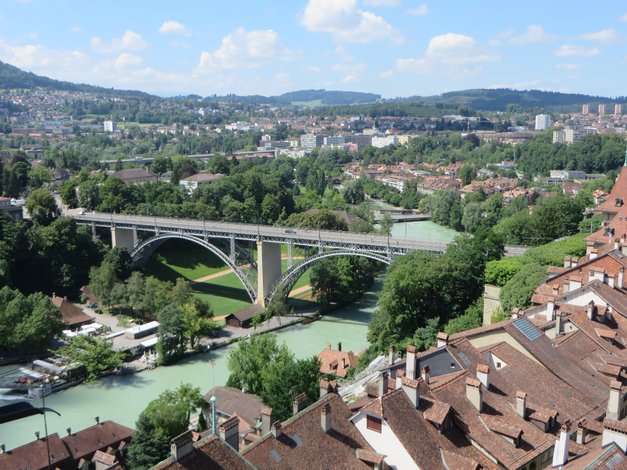 Picture-perfect Bern is a visitor-magnet. Photo by Deborah Stone

If there were a beauty pageant for European capitals, Bern would get the crown. This well-known Swiss city oozes with cosmopolitan charm, history and culture, and consistently gets high marks from visitors. They extol its accessibility, unique attractions and impressive Alpine views, as well as its ample shopping and dining options.

Founded in 1191, Bern was built on a peninsula which offered natural protection on three sides. According to legend, it was named after the first animal that Duke Berchtold V. von Zähringen caught – a bear – while he was hunting during the construction of the city. As the town’s heraldic animal, the bear is found everywhere you look. There are bears on flags and statues, frolicking around as fountain figures and in clockwork shows, and their image is often replicated in gingerbread and chocolate confections, as well as in other souvenir items. And of course, real bears make their home in the famed BearPark along the banks of the scenic Aare River.

Bern is considered a gem of medieval architecture in Europe. Photo by Deborah Stone

A fire in 1405 caused major damage to the city and most of it burnt to the ground. It was subsequently rebuilt in the Gothic style using local sandstone as the primary material. In 1848, Bern was elected the capital of Switzerland by the first united parliament, and then in 1983, the city’s Old Town was designated a UNESCO’s World Heritage Site. Today, with its covered promenades, towers, Renaissance fountains, and churches dating back to the Middle Ages, Bern is considered a gem of medieval architecture.

Rising high over the city is Münster Cathedral, Switzerland’s largest ecclesiastical building and the dominant structure in Bern’s Old Town. Of special note is the basilica with its three naves and the portal containing 234 colored depictions of the Last Judgment. To reach the ideal vantage point of this masterpiece, you’ll need to climb 344 steps up to the 328-foot tall spire. The reward is well-worth the exertion, as there, surrounded by picturesque rooftops, you can enjoy magnificent city and snow-capped mountain views. Down below in front of the Cathedral is the colorful and bustling Münster-Terrasse, a square where people have been gathering and meeting for centuries.

A guided tour of the Clock Tower gives visitors the opportunity to see the clock's internal mechanisms. Photo by Deborah Stone

You’ll also want to check out the Parliament Building and Parliament Square, as well as the Town Hall, a late-Gothic building which is the political center of the city and the canton or district of Bern. The Clock Tower, however, is a must-see on every visitor’s list. It’s a landmark medieval structure that has served the city over the years as a guard tower, prison, clock tower, center of urban life and civic memorial. Though it has gone through many redecorations and renovations in its 800 year-existence, the Clock Tower remains one of Bern’s most recognizable symbols. It’s an ornate astronomical timepiece with moving figures that pop out before the hour and perform an entertaining ritual much to the delight of those in observance. If you are interested in learning about the clock’s internal mechanisms, guided tours in the tower are available, which allow you to view the clockwork figures step for step all the way to the famous third crow of the rooster. Then, head up the spiral staircase to the observation platform for another priceless view of Old Town.