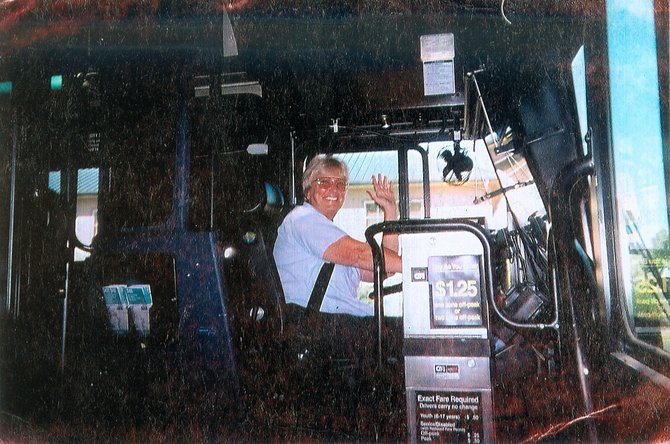 April Ryan driving her bus on a sunny day. You can tell it wasn't the day of her story, as there's a smile on her face!

Looking out the living room window, I sit holding a warm mug of cocoa, feeling comfortable, maybe even smug. Sweet chocolate aroma tickles my nose as I stare outside. I'm watching snowflakes fall, announcing the fourth winter of retirement from driving Metro city busses around the seven hills of Seattle. Twenty-seven years of weather, traffic, and passengers crammed tight in the aisle way. The inside bus mirror reflecting bodies swaying in unison as my foot taps from the brake to the gas pedal back to the brake, causing a silent group dance with the flow of traffic. People loudly express their expert opinions on how to be a bus driver. "If you drive faster we'll be on time." "You shouldn't have stopped for that yellow light." "A man would never drive so slow." The open door becomes a stage entrance: the fare box providing a place for improvisation, a show of performance art for the riding audience. Armed with a schedule, the public has no mercy for busses arriving late.

My foot still starts to shake when I see snow covered streets.

The hills of Seattle become an icy roller coaster sleigh-ride plunging toward Puget Sound. Driving down an icy hill in an articulated bus, I looked in the driver's side mirror, watching the middle bend, swinging out into the oncoming lane, the bus forming a loose horseshoe sliding downward. Surprised faces pressed against windows, eyes wide open, giving me an Orphan Annie stare, like in the old Sunday funnies. I wasn't laughing. I couldn't stop. Sliding down hill, my fingers turned bone white from strangling the steering wheel with a death defying grip.

It seems odd to me now, but I felt I needed to look calm while driving a bus filled with screaming riders. A surprised applause cut through the air as the bus coasted to a safe stop. My heart beat a delirious rhythm in unison with a chorus of relieved cheers.

Driving up an icy slope became a challenge equal to climbing Mount Rainier. Again, I remember my foot thumping like a wild rabbit, pushing the pedal for a steady speed up hill to reach the top without coasting backwards. My eyes focused on the hilly road ahead, no stopping to get stuck in a slanted snowdrift. Shaky hands sweating in fear of having the bus positioned like a rocket, spinning tires going nowhere. Halfway up hill, a young man waved frantically from the bus stop. My finger pointed to the top of the hill, chained tires slowly moving upward. Furious he was passed by, he threw his backpack at the bus. Hearing a thump vibrate through the air, my body started trembling, worried he might have slipped under a tire when tossing his bag. Looking at the passenger side mirror to see if he was still standing, gripping fear turned into eye-popping shock! A strap from his bag had hooked on the mirror arm where it dangled like a prized catch in an ocean of snow. He was stumbling in the drifts, trying to run up hill to retrieve his pitched sack.