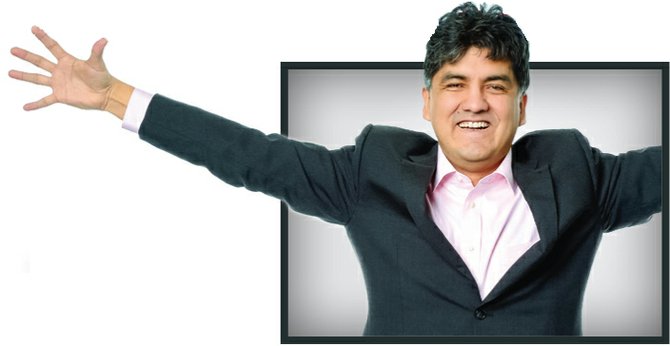 At age 47, Sherman Alexie may be a bit young to be worried about aging. But the nationally acclaimed poet, author, screenwriter and performer has found himself focused these days on how he’s changing.

His hair - graying all over and sprouting in odd places. His body - shifting, sagging, growing.

“What’s happening to my body is just hilarious – like the apocalypse is hilarious,” said Alexie, whose style mixes humor with humility. “Random hairs. I have to constantly be grooming because of the hair - ear hair, forehead hair, the funniest thing, the gray nose hair. It’s neon because those nostrils are so dark and here comes my elderly nose hair.”

Alexie, a Spokane/Coeur d’Alene Indian (a term he prefers over Native American), is one of the rare few who makes a very good living as a writer. “I’m in the one percent and I did it with books, which is nuts,” he says. He is turning his focus these days toward the topics of aging and health – both in his standup comedy routines and as a frequent speaker at local charity events.

“My father died 11 years ago of kidney failure on years of dialysis,” he told the audience at Northwest Kidney Centers’ Breakfast of Hope fundraiser in May. “The grief has not abated. It’s changed shape. He’s coming back day by day as I look in the mirror.” Alexie then fiddled with the growing jowl under his neck. “I could carry things in it. My son plays with it.

“I’m really starting to look like him in the shower,” Alexie said of his father, Sherman Alexie Sr. “I shower with my eyes closed now because nobody really needs to see it.”

Life stories. Humor. Emotion. Alexie, like Mary Poppins, offers the spoon full of sugar to help the medicine go down as he weaves his tales and lessons. He was born with hydrocephalus and underwent brain surgery at six months, not expected to live. Even after surviving the operation, doctors predicted he would face severe disabilities. He suffered seizures throughout his childhood, but he persevered in a big way. He learned to read by age three and was devouring novels, including John Steinbeck’s The Grapes of Wrath, by age five. Often ostracized from his peers, he decided as a teenager to attend high school off the Spokane Indian reservation. He had found his mother’s name written in a textbook at the reservation school and realized that he and his classmates were using the same materials his mother had used 30 years earlier.

When he transferred to Reardan High School near Spokane, he was the only Indian – other than the school mascot. But that didn’t slow him down. Alexie became a school basketball star and founded the drama club. He earned a scholarship to attend Gonzaga University, where he went for two years before transferring to Washington State University. Although Alexie had originally planned to become a doctor, he fainted numerous times in human anatomy and instead found himself drawn to poetry. After earning a BA in American Studies he had two of his poetry collections published.