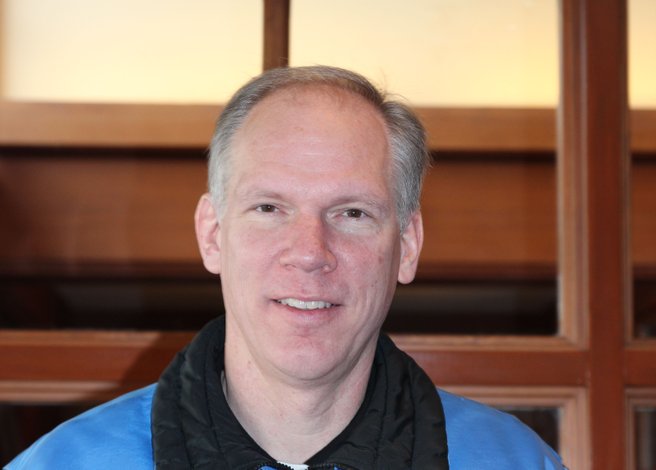 Not coincidentally, Gerrit is wearing blue in this photo.

No self-respecting kindergarten boy in 1967 would have ever admitted to liking the color pink, even if they did like it. I was no exception. Pink was, after all, “a girl’s color.” When guys started wearing pink Oxford button downs in the 80s, I couldn’t make myself do it. All my friends had them, and they all looked cool in them. However, when I tried one on at Nordstrom’s, it just made me feel “wrong”—too sensual—so I put it back on the rack. To this day, I’ve never tried another piece of pink clothing.

However, as I sat down to write about an early memory of a color—a writing class assignment—my mind immediately went to a story from kindergarten. My favorite color had always been blue, as long as I could remember, and every piece of clothing I wore, chose, or that family members bought for me had blue in it. I should have had blue eyes, others told me, because of my blond hair, my two blue-eyed grandmothers, and my fair Dutch grandfather.

As I reflected on the childhood image, I started laughing at the sudden realization that there was an amazing coincidence between this early memory and my present novel project.

As Ariele went through the substantive review of the first 100 pages of my novel, she encouraged me to use more imagery in the story. I thought about the challenge, and came up with the idea of using the color pink—something unusual. How would it look to have an adult male whose favorite color was pink? Certainly not stereotypical. Pink was to be the symbol of love for the main character, Jonathan. He loved the color because it was his wife,

Maria’s favorite, and because every time he saw it, he remembered her. But pink was also a token of bereavement and betrayal for him: bereavement because Maria had passed away prematurely, betrayal because in the novel, Jonathan confronts characters dressed in pink who try to assassinate him.

Now, the connection with kindergarten:

At the beginning of the school year, our teacher divided our class in half and asked us to choose a color name for each group. One group chose red. The colors blue and pink were put forward for ours. The first secret ballot came to a tie. So, we had to take a second vote. I had a crush on a girl, so I wrote “pink” on my paper, thinking it would make her happy and like me more. Because she had a crush on me, she chose blue. The re-vote ended up in a draw. This girl and I whispered to each other and laughed when we realized that both of us had crossed the gender divide in order to please the other. We agreed that we would both vote for pink in the third round. The girl’s name was Maria.

Blue, however, won the day, much to my relief.

I find it both amazing as well as hilarious that the name Maria and color pink ended up in my novel, without me ever having given thought to my kindergarten years. Subconscious connection? Possibly. Deliberate? Definitely not. Strange coincidence? Absolutely! But, I would never have recognized the unintentional connection without this writing assignment.

Bio: Gerrit Hansen returned to the Pacific Northwest in 2012 after having lived 26 years in Indonesia. His upcoming fantasy novel, The Hold, inspired this piece.

SHARING STORIES is featured on www.northwestprimetime.com, the website for Northwest Prime Time, a monthly publication for baby boomers, seniors, retirees, and those contemplating retirement. The newspaper can be found in the greater Seattle area and other Puget Sound locations. For more information, call 206-824-8600 or visit www.northwestprimetime.com. To find other SHARING STORIES articles on this website type "sharing stories" in the search function.