Inspirations from a soul survivor 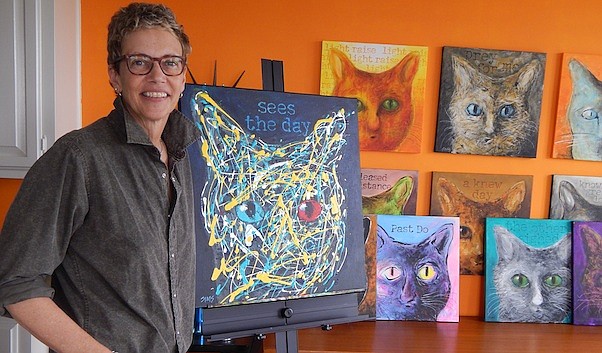 San Diego - Jody Sims has spent her entire career as an advocate, dedicated to empowering women and girls in sports and in life.

That all began to change two years ago, when a series of tragic events left Sims feeling detached, lost and defeated. However, on Oct. 6 she will start a new chapter when she debuts a very personal book that signifies her emergence through those dark times.

“Soul Provider: Conversations with my cat,” contains photographs of the 20 acrylic paintings Sims churned out during a painful but immensely healing period this spring and summer. Included with the photographs are journal entries describing each one and passages by famous others she had saved along the way that resonated with each step of the process.

In September 2011, Sims was at the top of her game. Working for a local nonprofit, Sims was in charge of their 100-year anniversary festivities while also planning the third annual “Fling” – a weekend meet-up she founded for women basketball fans that took place in the NCAA Final Four championship city – when her partner, Susanne Whiting, was involved in a catastrophic car accident.

Sims quickly adapted, tackling the situation like a project. She balanced her two equally demanding roles by coordinating Whiting’s daily appointments, rides and other needs before leaving for the office.

Then, seven months later, the unthinkable happened: Sims herself was diagnosed with Stage 3 breast cancer. For the next eight months, she would become her own project, assembling a team and undergoing a rigorous series of clinical trials mixed with aggressive chemotherapy.

Whiting, a massage therapist before the accident and still on the mend herself, instantly became the couple’s nutritionist, mastering daily, protein-fortified shakes and a vegetarian-vegan diet focused on trauma and cancer. Once able to walk again, Whiting also made three trips per week from their Kalmia Street apartment to a pharmacy in Hillcrest and gave Sims energy-based toe massages during her nightly infusions.

“I found it [all] healing therapy for me, too,” Whiting said.

Sims responded so well to the treatments she would not need mastectomies, but two months of daily radiation was still required as a precaution. Unfortunately, this would extend her leave of absence to a full year and her company was unable to hold her position.

In March 2013, after 11 months of side effects, severe radiation fatigue, heart complications and the loss of her job, this “project” suddenly derailed.

“I didn’t have words for what I was feeling. All I knew was that I was really emotional, but I didn’t want to go to therapy and talk about it,” Sims said. “I felt like I was losing sight of me. … I had to do something that I was afraid to do in order to just get myself back on track.”

A few days later she enrolled in an abstract art class at the Art Academy of San Diego in North Park. With her cat Scout as her muse and her instructor Reed Cardwell – who was riddled with cancer himself – as her mentor, the class became her guiding light. 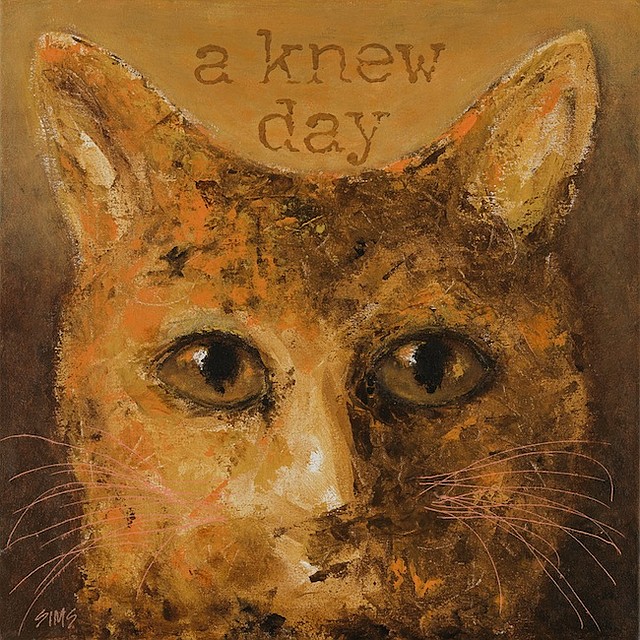 Photo By: Courtesy Jody Sims
Sims’ “a knew day” was inspired by her aunt.

Sims said she barely made it through the first class, but every Monday afternoon for three months she found herself in front of an 18-by-18-inch canvas creating a new stepping stone on the path back to her self.

“Soul Provider” unveils the feline-inspired paintings in the exact order Sims created them. Each cat image is different in both style and technique, and Sims said they represent “what I wanted … or needed to have happen.”

Her use of homophones – a word pronounced the same as another but that has different meaning: for instance “a knew day” – which she uses in the background of 16 images offer even deeper insight to her struggles and triumphs along the way.

“I didn’t know what they were or what they were called,” she said. “It really happened by accident and was all about my being afraid to tell people what was going on but wanting and needing to.”

For most of her recovery, Sims had pretty much stayed “off the grid,” she said, so it is ironic that after posting one of her paintings on a whim, Facebook became not only her “testing” ground but also her inspiration for the book.

“The response was so overwhelming,” she said. “It gave me so much courage and strength to just keep going and made it even more powerful.”

Next year, Sims and Whiting hope to take an RV, their two cats and all the paintings on the road for a book tour. For now, she plans to do local author signings and sell them through her website, jodysims.com.