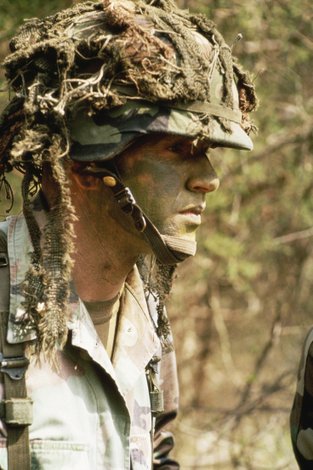 Marine Lance Corporal Carlos Lozano drops from a helicopter during a simulated raid, confronts mock Afghan villagers, and is rocked by loud explosions. Then, obeying orders, he sits silently and stares at his boots.

The Marine isn’t happy about stopping to meditate. But it just might be for his and the entire Marine Corps’ good.

The Associated Press spoke with Lozano about his training exercise:

“Lozano said he and fellow Marines were skeptical at first. Some wondered why their rigorous combat training was being interrupted by a class asking the warfighters to sit in silence and stare at their combat boots, becoming aware of how their feet touched the classroom floor.”

Jeffery Bearor, the executive deputy of the Marine Corps training and education command in Quantico, Virginia, told the AP, "This is not tied to any religious practice. This is about mental preparation to better handle stress."

Marines are taught to quiet the mind in order to reach an inner calm.

Many are finding the mind to be the door to improved mental and physical health. Those utilizing mindfulness, meditation, or prayer-moments, to control and calm thought, claim these methods reduce stress and increase productivity.

Four years ago, Time reported that the Army intended to train its “1.1 million soldiers in the art of mental toughness.” The Defense Department hoped that “giving soldiers tools to fend off mental stress would toughen its troops at war and at home.”

Years ago, I had the opportunity to unofficially introduce prayerful reasoning to a member of a very selective federal law enforcement agency.

In 2001, I was flying in a prop-plane from Dallas to Waco, Texas. I asked the man sitting next to me about his business, and he mumbled his answer. I thought, perhaps, the noise of the propellers made it difficult to hear. "What?" I asked again. He repeated softly, "Secret Service."

Turns out this man guarded the President of the United States. President George W. Bush was about to travel to Italy to attend the 27th G8 summit, to meet with Pope John Paul II, and to meet with President Carlo Azeglio Ciampi. A majority of the passengers onboard the plane were also agents on their way to Bush’s ranch near Waco.

I asked the agent if he knew that people prayed daily for the safety of the President and for those guarding him. He told me, "I can feel their prayers and they are greatly appreciated."

I asked him, “What is the biggest challenge of your job?” He told me, “Fear. Fear would paralyze me and keep me from making immediate and correct decisions."

I didn't think it was a good idea to pry too much, but I did share with him what has helped me. "I give talks on the connection between health, thought, and spirituality," I said. "Even when I'm confident about talking in front of an audience, fear will start to sneak in. But if I quickly recognize that the fear is not really mine -- it has nothing to do with me -- then it actually lessens or even disappears and things go better."