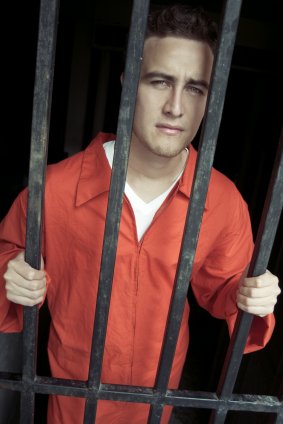 - ©istockphotos, model for illustrative purposes only

It was 3:30 in the afternoon. A squirrel rested, unaware he was about to be an afternoon snack for an approaching owl. So, I started my rental car, which startled the squirrel, and he dashed to safety.

My actions saved one, yet, irritated another. Then I wondered about the actions that had landed the young people, I was about to meet, into trouble. What had caused them to act or react?

I was sitting in my rental in the parking lot of a baseball field near the Barbara Culver Juvenile Detention Center in Midland, Texas. I had arrived early and decided to take thirty minutes to collect my thoughts, a little spiritual reasoning.

I was told I would be at the Center for about an hour. Yet, I had no clue about how many people I’d be speaking with. Would it be two or three? Maybe it would be four of us, around a table.

I pulled into the center’s lot, parked, and announced myself into the speaker. The door opened and I walked through the metal detector.

A guard brought me to the classroom where I’d be speaking. I asked, “How many will be here?” He said, “Thirty-one.” I thought, “Wow, you have trouble talking to your own two kids.”

At the front of the empty classroom I paused to get my bearings. My prayer went something like this, “Well, here I am. Thank you for leading me, animating me. Show me how I express your wisdom. Keep reminding me that each one that comes into this room belongs to you. Please, put your words in my mouth.”

Then the procession began. Thirty-one of them, hands behind their backs, slowly made their way to rows of chairs. Thirty-one orange jumpsuits. Four young women. Twenty-seven young men. All in their teens, except two boys, age ten.

Thirty-one. Not one smile. Not one hello. Their body language screamed, “Disdain.”

I was introduced: “This is Mr. Wommack. He’s here to talk with you. Listen up. If you make a noise, disrupt, slump in your seats, or are in any way are out of order you will lose all privileges the rest of the day.” I felt like the vulnerable squirrel.

A quick battle took place in my thought. “What chance do you have in helping these kids? They’re just losers. You’ll never get their attention, don’t kid yourself!”

An angel message took over, “Are they really losers? Haven’t you been learning that each child of God is really spiritual, and spiritually dynamic? Each expresses divine dignity?”

I began to speak, trying to look past the orange. I told them about myself. Then I was led to challenge them. I challenged them to be a thermostat, not a thermometer. A thermometer just rises or falls according to what is happening around it. However, a thermostat, on the other hand, regulates.

I challenged them to be healers, spiritual healers. I explained that by what they will learn in their spiritual journeys they could be regulators, thermostats. They could turn situations higher, holier. Everyone they will meet would be happier and healthier because of having met them.