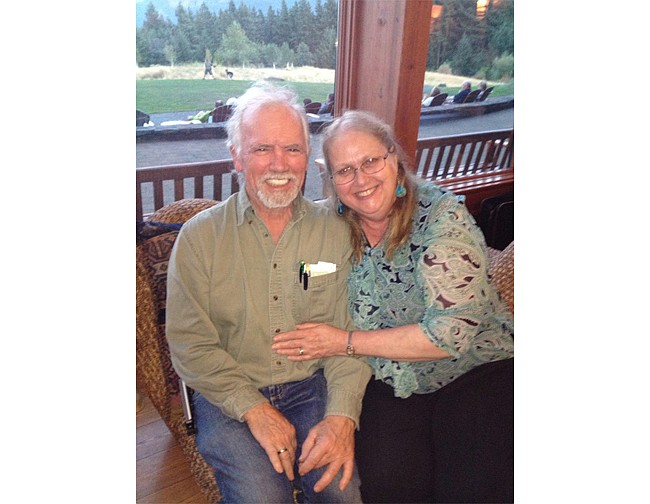 (left to right): Charles Peck and Jennifer Levy-Peck, PhD, will be regular contributors to Northwest Prime Time's website (www.NorthwestPrimeTime.com). The couple is writing a book for baby boomers, seniors, and those over age 40 looking to create and maintain a romantic relationship that is wonderfully thrilling at any age. Their column, Magic at Midlife, will appear regularly in www.northwestprimetime.com. You can participate in the creation of the book by sharing your experiences in a survey: www.surveymonkey.com/s/MidlifeRelationships.

In this column, we talk about relationships that begin in midlife or beyond. Whether you and your partner have been together for a few weeks or several years, holidays can present a challenge. Every family develops its own holiday traditions and routines, and trying to merge them can be…interesting.

James and Maria have been together for less than a year, and this will be their first Christmas living together in Seattle. James’ children by his first marriage (who are in their early 20s) expect him to travel to California for Christmas at their mother’s home, as he has done for the past ten years. His children have only met Maria once, and having her join the celebration at James’ ex-wife’s home doesn’t seem like an attractive option to anyone. Maria’s daughter, who lives in the local area, is more welcoming to James, and would like the two of them to be there on Christmas morning to watch Maria’s grandchildren open presents. Maria has typically spent quite a bit of money on presents for her family even though her budget is tight, and she loves sharing the holidays with her daughter and grandchildren. Neither James nor Maria wants to be apart for Christmas. However, James would feel guilty if he didn’t see his kids, and he is afraid they will resent Maria if he doesn’t make the trip. Maria can’t bear the thought of missing Christmas with her grandchildren, and is a bit irritated that James has suggested she cut back on Christmas gifts this year.

There are no “right answers” to this dilemma, and there is probably no way to ensure that everyone is 100% happy. There are, however, some keys to handling the situation in order to minimize conflict. First, James and Maria each need to acknowledge and respect the importance of their existing family relationships and traditions. If they set this situation up as a loyalty test, everyone will lose. Second, unless they have combined their finances, Maria’s Christmas spending is up to her. In this case, even though they have begun making spending decisions together, James decides it is wiser to suggest economizing on something else, because he recognizes that the gifts are very important to Maria. Instead, he decides to help Maria find the presents she wants to buy at the best possible price, which turns out to be a very workable compromise that Maria appreciates.

James is still faced with the decision about traveling to California. In truth, he has always found the holiday celebration at his ex-wife’s home to be a bit awkward and unpleasant, although he does enjoy seeing his kids. After some consideration and discussion with Maria, he decides that instead of traveling himself, he will send his son and daughter airline tickets for a visit to Seattle in January. Maria offers to spend a few days at her daughter’s home during this time so that James can have time alone with his kids. They plan for Maria to join in a couple of low-key activities so she and James’ children can get to know each other better. As it turns out, James’ son and daughter are pleased at the prospect of a trip to Seattle and having some quality time with their dad. When they gripe about his missing Christmas in California, he jokes that Christmas has been moved to January in Seattle and he creates a traditional holiday celebration during their visit.

With consideration, creativity, and communication, it is usually possible to preserve the aspects of the holidays that matter most to each of you, while being flexible enough to develop alternatives that take your new relationship into account. A good way to start is to identify the aspects of the holiday that are most important to you. This may be a traditional holiday dinner, time spent with family, cherished ornaments on the Christmas tree, cooking potato latkes for Hanukkah, or an annual family ski trip. You can be flexible about times and dates while still celebrating in the way that is most important to you. For example, some families have Thanksgiving dinner on Friday or Saturday so that family members who have other commitments can be present without feeling pressured to make a choice about where to be on Thanksgiving Day.

Some pitfalls to be avoided include insisting on combining family celebrations if children or grandchildren (or for that matter, your parents) aren’t quite ready for that step; minimizing the importance of your partner’s traditions (even if you think going out for Chinese food on Christmas Eve is silly); or failing to recognize that things inevitably need to change and evolve as your relationship grows. You may find that bringing pumpkin pie to your partner’s dad in a nursing home is actually a pretty good way to celebrate Thanksgiving, or that your step-grandchildren add an extra measure of joy to the holidays. Be open, be loving, be considerate, and have fun – isn’t that what family holiday celebrations are all about?

Northwest psychologist and author Jennifer Y. Levy-Peck, PhD, and her husband Charles Peck are writing a book for baby boomers, seniors, and those over age 40 looking to create and maintain a romantic relationship that is wonderfully thrilling at any age. Their column, Magic at Midlife, will appear regularly in www.northwestprimetime.com. You can participate in the creation of their book (and enter to win a $100 Amazon gift card) by sharing your experiences in a survey: www.surveymonkey.com/s/MidlifeRelationships. Northwest Prime Time is a monthly publication for retirees and those contemplating retirement. It can be found in the greater Seattle area and other Puget Sound locations. For more information, call 206-824-8600 or visit www.northwestprimetime.com.