Reducing your risk of heart attack through moderate drinking 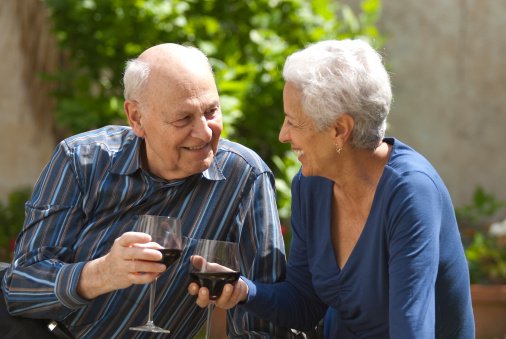 There's plenty of truth to be found in the old adage that says "everything in moderation" is a good thing. There have even been a number of studies that suggest the benefits of moderate drinking could result in a lowered risk of heart attack among men and women. So what are the facts behind drinking and heart disease, and can you actually lead a longer life by uncorking a bottle every couple of nights instead of being a teetotaler all your life?

Past studies that have asked those very questions, and have come up with some interesting results. For instance, in one study that was conducted by medical researchers in Italy -- a place that knows some good spirits -- it was said that people who partook of light to moderate drinking were 25 percent less likely to have a heart attack or a stroke than people who didn't drink at all. However, this finding was offset by the discovery that heavy drinkers were twice as likely to succumb to the ill effects of heart disease than non-drinkers.

Another study aimed at studying the benefits of moderate drinking on women came to the conclusion that those who imbibed once per day had a 20 percent lower chance of having a stroke than those who didn't drink at all. But once that scale is tipped and one daily drink becomes two, the risk of stroke shoots way up, putting those women at a 44 percent higher risk than non-drinkers.

Alas, the results of these and other studies points to the very likely conclusion that moderation is the key to longevity. The real question, however, is this: Is it really the alcohol that's extending lives, or the other activities that people who exercise moderation partake in? After all, it's not hard to come to the conclusion that someone who shows restraint in their drinking habits probably also shows restraint in other habits, such as overeating. The same line of logic can conclude that people who drink and eat in moderation probably also lead a healthier lifestyle, getting exercise in moderation as well.

In the end, the true link between light to moderate drinking and heart disease could be one of association. So while the doctors and the research clinics continue their studies, feel free to have the occasional drink if you're so inclined -- just don't overdo it.