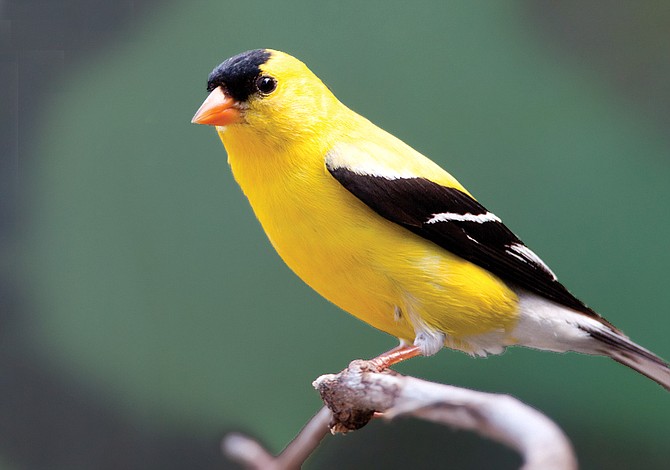 As we watch the small, delicate bird dart through our garden all we see is a flash of bright yellow with a few bold, black markings. But as it lands on the thistle feeder we see that it is none other than our Washington state bird, the American goldfinch Carduelis tristis (originally known as willow goldfinch).

It wasn’t easy becoming our state bird; there was quite a lot of competition and several years of voting before the goldfinch became official. A campaign began in 1928, the first of three to find an appropriate bird to represent the Evergreen State. School children were approached by the Legislature to choose a bird. The meadowlark was overwhelmingly decided upon by the children. However, the legislators were not sure since Oregon had just named the meadowlark as its state bird plus six other states also had the meadowlark as their state bird.

Since the Legislature didn’t take any action on the 1928 vote, another state referendum was sponsored by the Washington Federation of Women’s Clubs in 1931. This time the American goldfinch did well against other birds such as the junco, song sparrow, pileated woodpecker, and western tanager.

But twenty years and two state-wide contests were to pass and by 1951 the legislators still had not approved a state bird. Finally, the Legislature again decided to let the school children choose and the goldfinch was unanimously selected as our state bird (and this time with the Legislature’s official and final approval).

Goldfinches, like the other finches large and small, have a conical beak for opening seeds – weed seeds and thistles being a favorite. A local woman who feeds the birds in her yard noticed: “The dandelions are dancing? No, it is not the dandelions but little yellow birds feeding on the fluff. There was a banquette in my overgrown backyard that was so much prettier then any mown lawn could ever be. Flitting from stem to stem was the entire extended family of goldfinches. They found a feast in my unkept yard.”

Since many plants tend to go to seed in mid-to-late summer, the goldfinch tends to nest much later than other birds, in late June or July. They can lay 2-7 bluish eggs and some pairs nest up to three times in the season.

The male American goldfinch is the brightly colored one: a startling bright yellow with a black cap, wings and tail. The female is an olive drab color with black wings and tail. After the breeding season the male loses his bright colors and is more like the female in plumage color.

Goldfinches are often found in flocks, sometimes with pine siskins and other similar birds. Their flight, like most all finches, is undulating, an up-and-down sort of dancing flight. As one birder put it: “If there's a lovelier sight in the dog days of summer than a flock of goldfinches roller coastering over a sunlit field, I sure haven't seen it.”

State symbols are often adopted after much effort from citizens, school children and legislators. The specific item for a symbol is researched and then is requested to be a bill to be voted on. If children have presented the item for the bill, they can follow it through as it is processed; a learning experience in government. I think we can be proud of the children that eventually selected the beautiful American goldfinch as our state’s bird.

This article appeared in the May 2012 issue of Northwest Prime Time, the Puget Sound region’s monthly publication celebrating life after 50.