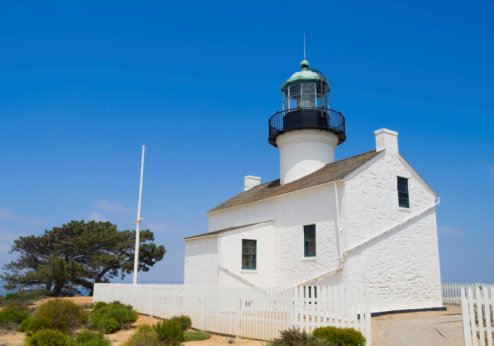 There's nothing that can quite compare to the gorgeous natural scenery that surrounds the many coastal lighthouses that can be found up and down the California coast. If you're itching to get out there and see them, we've put together a list of some of the top destinations for a California lighthouse road trip so you can plan a driving route from San Diego all the way up to Eureka.

Situated at the mouth of the San Diego Bay, the Old Point Loma Lighthouse was built in 1855 and deactivated in 1891. Having only been in operation for 36 years, the lighthouse was replaced in 1891 by the appropriately named New Point Loma Lighthouse because its position atop a 400-foot cliff made its light difficult to see through low hanging clouds and fog. That perch high above the sea, however, gives visitors one of the best views of the San Diego harbor below.

Built in 1926, the Point Vicente Lighthouse on the Palos Verdes peninsula just 30 miles south of Los Angeles can be seen from 20 miles out at sea. Still in use by the U.S. Coast Guard, the lighthouse is only open to visitors on the second Saturday of each month, so plan accordingly. Taking the extra effort to be there on the right day will be well worth it, as from atop the cliff it stands on, you have a clear view Catalina Island.

Still in operation today since its establishment in 1889, the Point Sur Lighthouse towers 270 feet above sea level on an outcropping of volcanic rock. It's one of a small number of coastal lighthouses listed on the National Register of Historic Places and can only be reached by taking a guided walking tour. Regardless of when you take your road trip, you'll be in luck -- tours are open year round.

Further up the coast north of San Francisco, smack dab in the middle of one of the foggiest places in the world, you'll find the Point Reyes Lighthouse. Built in 1870, the lighthouse was built just above the waterline to counteract the effects of the heavy fog. It was decommissioned in 1975 and is now owned by the National Park Service. Self-guided tours can be taken from Thursday through Monday, 10am to 4:30pm.

If you keep moving about as far north as you can get without leaving the state of California, you'll come across the Trinidad Head Lighthouse, located 20 miles north of Eureka. Overlooking the Pacific Ocean and the town of Trinidad, the oldest town on the coast of Northern California, Trinidad Head's history dates back to its construction in 1871. Not a bad place to end your road trip of coastal lighthouses, this is considered by many to be one of the most beautiful lighthouses on the entire west coast.

A leisurely drive up and down the coast of California to take in the rugged oceanside scenery could take you anywhere from three to seven days, so be sure to plan a driving route that gives you plenty of time to stop and smell the sea salt.