After its Introduction at The Village Theatre, MILLION DOLLAR QUARTET Returns to Seattle on its National Tour Coming to The Paramount Theatre May 15 – 20, 2012 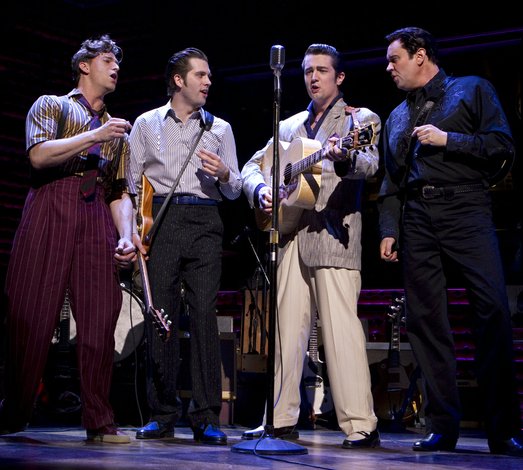 The national tour of MILLION DOLLAR QUARTET, the Tony Award®-winning musical inspired by the true story of four rock ‘n’ roll icons, will play The Paramount Theatre starting May 15 as part of the KeyBank Broadway at The Paramount series. Tickets are now on sale and are available on-line at stgpresents.org, tickets.com, and select Ticketmaster locations. Tickets are also available by calling 877-STG-4TIX (784-4849) or in person at The Paramount Theatre Box Office (Monday through Friday, 10am to 6pm).

On December 4, 1956, an auspicious twist of fate brought Johnny Cash, Jerry Lee Lewis, Carl Perkins and Elvis Presley together. The place was Sun Records’ storefront studio in Memphis. The man who made it happen was Sam Phillips, the “Father of Rock ‘n’ Roll,” who discovered them all. The four young musicians united for the only time in their careers for an impromptu recording that has come to be known as one of the greatest rock ‘n’ roll jam sessions of all time.

The show started here in the Seattle area as a reading at The Village Theatre in 2006. Six years later, the show continues to enjoy successful runs across the world with engagements in New York, Chicago and London. In 2008 the smash-hit musical opened in Chicago and continues its run at the Apollo Theatre. The Broadway production premiered at the Nederlander Theater in April of 2010 and currently is running at New World Stages. The first international production of MILLION DOLLAR QUARTET debuted in February 2011 at the Noël Coward Theatre in London's West End.

MILLION DOLLAR QUARTET will be at Seattle’s Paramount Theatre for eight performances. The schedule for the Seattle engagement is:

Tickets for MILLION DOLLAR QUARTET start at $25 and are now on sale and available on-line at stgpresents.org, tickets.com, and select Ticketmaster locations. Tickets are also available by calling 877-STG-4TIX (784-4849) or in person at The Paramount Theatre Box Office (Monday through Friday, 10am to 6pm).

About Broadway Across America

Broadway Across America (Producer) is owned and operated by British theatre producer John Gore (CEO) and entertainment industry veteran Thomas B. McGrath (Chairman). Broadway Across America presents first-class touring musicals and plays across 40 North American cities. Under the supervision of Beth Williams (COO & Head of Production), Broadway Across America is also dedicated to the development and production of new and diverse theatre. Current Broadway productions include Promises, Promises; Million Dollar Quartet; A View From The Bridge; Lend Me a Tenor; La Cage aux Folles; Hair and West Side Story. Touring productions include Dreamgirls and Nickelodeon's Storytime Live. Please visit BroadwayAcrossAmerica.com.