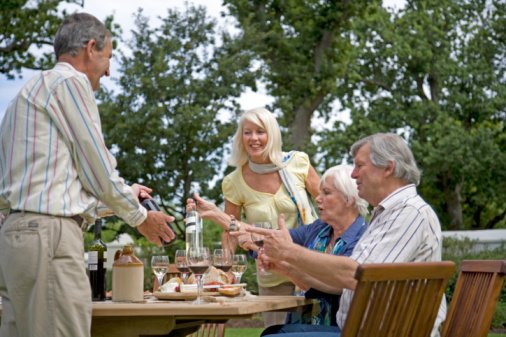 No doubt you've heard that being a social butterfly in your later years can bring reprieve from the isolation and loneliness of growing older. It can not only help keep your mind and social skills sharp, but having a circle of friends can also be critical to staying active and healthy. But did anyone ever tell you that keeping up social activity might also be extremely helpful in fighting Alzheimer's?

According to a study conducted in 2006 by the Rush Memory and Aging Project and later published in The Lancet Neurology , there's reason to believe that elderly people with increased exposure to visits from family and friends experienced fewer symptoms of Alzheimer's disease. So does this mean that mental and verbal interaction with others can be a critical component of fighting Alzheimer's? According to the final results of the study, it's not entirely clear.

What we can glean from the study tells us a lot about the way the human brain works, as well as its lifelong reliance on communication with others as a method of not only keeping it sharp, but in also staving off the ravaging effects of degeneration. Those test subjects who maintained larger social circles and experienced more frequent interaction scored higher on mental tests than those with fewer interactions.

The limitations of the studies conducted don't say much about the possibility that staying social with Alzheimer's can reverse the process. Quite the contrary, most studies have shown that there is little that medication or human effort can do to stop the sometimes rapid deterioration that many senior adults face. But the fact that social interaction seems to have a slowing effect on the evolution of the disease is like a light in the fog for many seniors who worry that their worst days may still be ahead of them.

In the end, is it any wonder that staying social can have such a potentially positive impact on the human brain as it ages? With the knowledge that remaining social into your sunset years can be so important to your mental health, now's the time to start getting back in contact with old friends and family members you might have lost touch with. They may need you as much as you need them.