A gluten-free for all drives product sales 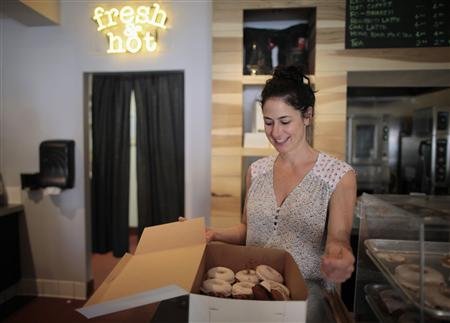 LOS ANGELES (Reuters) - Los Angeles voice actor Nancy Truman landed a new role as a full-time gluten-free baker after she tweaked her recipes to replace the wheat that was making her feel miserable.

Truman is among the estimated 18 million people in the United States who are sensitive to gluten -- a hard-to-digest protein found in wheat, rye and barley.

Another 3 million-plus Americans are thought to have celiac disease, a potentially life-threatening autoimmune disorder that is treated by eliminating dietary gluten.

In business, as in acting, good timing proved crucial for Truman.

Truman also had the good luck of being a friend and neighbor to Waylynn Lucas, one of Los Angeles' most celebrated pastry chefs, who is a fan of her gluten-free goodies.

The two now are partners in (fonuts), a new coffee shop that sells baked, not fried, doughnuts. Gluten-free options account for half of sales at (fonuts).

Lucas said customers are either avoiding gluten themselves or "have a friend, a boyfriend, a girlfriend, a cousin, a father, a mother, a whatever, who is gluten intolerant."

"When they see it can be delicious and a little more healthful, they're really turned on," Truman said.

Gluten is everywhere. It is in baked goods, pasta and beer, as well as some unexpected items, such as McDonald's french fries, lunch meat, lipstick and some medicines.

"Consumers do feel some sort of reward when they eat gluten-free products. They don't feel bloated. They don't have belly aches. This usually encourages them to repeat the purchase," said Ewa Hudson, Euromonitor International's head of health and wellness research.

Europe is ahead of the United States when it comes to celiac disease testing and awareness. Italy, for example, helps people with celiac disease pay for the additional cost of gluten-free foods.

But big U.S. companies are jumping into the fray.

P.F. Chang's China Bistro Inc for years has had a gluten-free menu and Subway, the popular sandwich chain, is testing gluten-free bread and brownies in Texas and Oregon.