REFILE: Americans get too much healthcare, their docs say 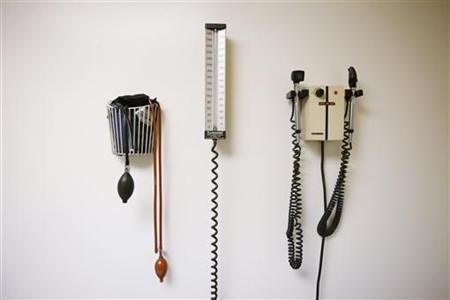 Devices used to take blood pressure, temperature, and examine eyes and ears rest on a wall inside of a doctor's office in New York March 22, 2010. REUTERS/Lucas Jackson

NEW YORK (Reuters Health) - Here is a diagnosis of what's wrong with health care in America, straight from the horse's mouth: There's too much.

In a new poll of primary care physicians, nearly half of them said their patients received too much medical care and more than a quarter said they were practicing more aggressively than they'd like to.

That could mean ordering more tests, prescribing more drugs or diagnosing people with diseases, although they would never have experienced any symptoms.

On the other hand, just six percent of doctors believed their patients were getting too little care.

"Physicians at the frontline of medical care are telling us that their patients are getting too much care," said Dr. Brenda Sirovich of the VA Medical Center in White River Junction, Vermont, who worked on the survey. "And we don't think we are just talking about the 627 physicians that we surveyed."

The findings come at a time when the healthcare budget is already overstretched and many fear it is about to spiral out of control.

"We spend a lot on healthcare in this country, more than anywhere else," Sirovich, also at the Dartmouth Medical School, told Reuters Health. "We realize that this is unsustainable."

According to Organization for Economic Cooperation and Development (OECD), the U.S. spent $7,960 per capita on healthcare in 2009. That's $2,608 more than Norway, the runner-up, shelled out.

Dr. Lisa Schwartz and Dr. Steven Woloshin, who also worked on the new study, were two of the three authors of a book called "Overdiagnosed: Making People Sick in the Pursuit of Health."

THE TALE OF THE MORPHINE PUMP

And it's not only your wallet that could end up hurting from excessive testing, experts say. In a short article published along with the poll in the Archives of Internal Medicine, one doctor recounted the story of a man who developed intractable pain after falling on an icy driveway.

He had several tests at the hospital, but all of them came up empty, writes Dr. Philip Wickenden Bale of the T.J Sampson Hospital in Glasgow, Kentucky.

All along, the man's wife had been telling doctors that her husband had a morphine pump in his back to treat chronic pain and that he'd fallen onto the pump. But no one had listened.

"I was beating my head against a wall," she said, according to Bale.

His prescription? Just listen to your patient.

"Much science and technology, with associated expense, was used to eliminate conditions he didn't have, while the art of listening well might surely have led to a faster, cheaper remedy," Bale writes.

Excessive tests may also lead to diagnosing conditions that would never have caused any problem in the first place, such as a slowly developing prostate cancer or a slightly elevated blood pressure.

Yet after such a diagnosis, it's difficult for doctors not to proceed to treatment, which may cause side effects.

"When you do anything to somebody, whether it is an intervention or a test, you are putting them in to the healthcare system in a way that exposes them to risk," said Sirovich. "Unnecessary care is potentially harmful."

So why would doctors order tests that they themselves believe are excessive?

Three reasons stood out in the survey, which is based on a random sample of U.S. doctors: fear of malpractice lawsuits, performance measures and too little time to just listen to patients.

"I'm not saying that physicians do tests in order to make money -- there is a potential to be a real cynic here -- but I think that the reimbursement model for most healthcare encourages utilization in a variety of ways," Sirovich said.

"It's a time for us to reflect about what incentives we have built into our healthcare system, and what directions they are taking us in."

(This story changes paragraph two to say that more than a quarter of doctors said they were practicing more aggressively.)