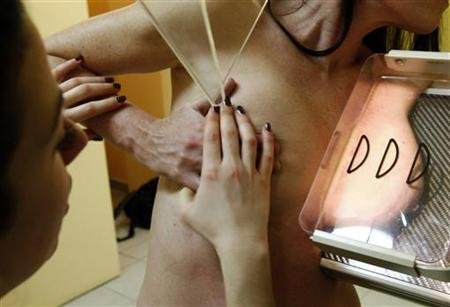 A woman undergoes a mammography exam, a special type of X-ray of the breasts, which is used to detect tumours as part of a regular cancer prevention medical check-up at a clinic in Nice, south eastern France January 4, 2008. REUTERS/Eric Gaillard

STOCKHOLM (Reuters) - Giving breast cancer patients radiotherapy and chemotherapy at the same time significantly cuts the risk their tumors will come back and should be considered as a new treatment approach across the world, cancer experts said on Sunday.

The double treatment, known as synchronous chemoradiation, could also save lives among people with breast cancer, a disease that currently kills 425,000 women a year worldwide, according to the British experts who conducted a major scientific study.

They said the synchronous treatment, which the study showed has limited side effects and does not harm patients' quality of life, should be considered for use by all breast cancer doctors.

"Clinical practice needs to be reviewed."

Breast cancer is the most common cancer among women. A recent study by the Institute for Health Metrics and Evaluation in the United States found that in 2010 it killed around 425,000 people and was newly diagnosed in 1.6 million.

Radiotherapy and chemotherapy are usually given after breast cancer surgery to kill any remaining cancer cells in the breast, chest wall or underarm area, and to try to reduce the risk of a local cancer recurrence. The standard approach is to give chemotherapy first, followed by radiotherapy.

But the best timings for radiotherapy and chemotherapy have long been debated among cancer experts, so Fernando's team decided to study various schedules of radiotherapy with a type of chemotherapy called anthracycline-CMF chemotherapy in patients with early-stage breast cancer.

The study involved almost 2,300 women in Britain who had already undergone surgery to remove their tumors.

The results showed that compared with the standard approach, giving both treatments at the same time "reduces the risk of local cancer recurrence by 35 percent in women with early breast cancer," Fernando said.

After a follow-up of over eight years, the study found that only 41 patients in the synchronous chemoradiation group had suffered recurrence, compared with 63 patients in the group who had standard chemotherapy followed by radiation treatment.

At five years, tumors had recurred in only 2.8 percent of those who got both treatments at the same time, compared with 5.1 percent among those who received the therapies separately.

Although there were no differences in overall survival rates between the two groups after five years, Fernando said he would expect to see survival rates rise in larger groups of patients over a longer time period.

"Even a 2.3 percent reduction in local recurrence rates will have an impact worldwide when we consider that this is a very common cancer," he said, citing data showing that for every four local recurrences of the disease prevented, one death from breast cancer death can be avoided.

Fernando said he has already changed practice in his own clinic and will send his data to Britain's National Institute of Clinical Excellence, which advises on treatment guidelines.

Michael Baumann, president of the European Cancer Organization, said more follow up would be needed to assess potential longer-term side effects. "I am convinced this trial will spur a lot of discussion," he said.