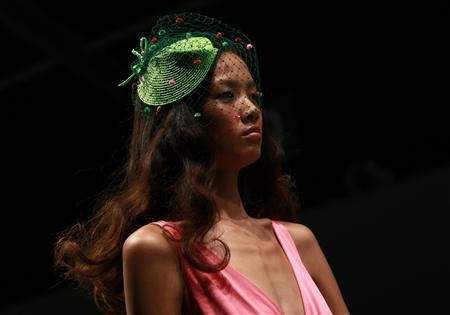 LONDON (Reuters) - With inspiration ranging from the yachts of the super rich to tropical beach colours, designers at London Fashion Week are seeking to ride out the tough economic times with creations that stand out and sparkle.

An array of colours and bold prints have prevailed on the catwalk since London Fashion Week began on Friday. Fashion theory may state that when times get tough hemlines drop but several names showcasing their designs for spring/summer 2012 have kept skirts short and dresses tightly fitted.

Designer Julien Macdonald said he was taking his clients on a journey from the yachts of Saint Tropez and Monte Carlo to China and Japan, with a collection filled with Asian print designs and embellished evening and cocktail dresses.

"The collection is exclusive, it's very expensive. Only the richest people in the world can afford to buy it," he said.

Macdonald, known for luxury designs which usually sell for hundreds of dollars, often hosts more than 400 people at his shows but this year picked a smaller, more intimate setting.

"I just invited the best. I said no to 550 very upset people," he said. "The recession affects every designer. People just want special things ... If you've spent the money on the clothes, you want to look a billion dollars."

At London Fashion Week, which runs until September 21, dozens of British and international designers are showing their lines, eager to entice cash-strapped buyers with their collections.

The brand was thrust into the spotlight when Kate Middleton wore a blue Issa dress to announce her engagement to Britain's Prince William last year. The dress sold out within 24 hours.

"If you have a good dress, you know a dress that makes you feel good, it's the only thing that lifts up your mood; so good dresses will always be in demand," Helayel told Reuters.

On Sunday, Mulberry, known for its expensive handbags, hit the beach for next summer with a seaside and pier rides inspired palette of colours and animal prints collection presented among giant ice cream cones and hundreds of animal balloons.

Dogs were also in mind with specially designed shiny macs, modeled by one pooch on the catwalk.

"The season's signature prints are bright enough to banish grey skies!" Mulberry said in a release.

Celebrities have also been adding to the glamorous touch with model Kate Moss and actress Kristen Stewart on the front row at Mulberry, and actress Pamela Anderson and artist Tracey Emin at Vivienne Westwood's Red Label show.

"What we're doing is just making women look great because we're offering them so much choice, they really can choose what suits them," Westwood told Reuters backstage after the show, as champagne corks popped at a makeshift bar behind her.

"It's always sexy, fashion is here to help, that's what we're here to do. It's a life enhancing experience."