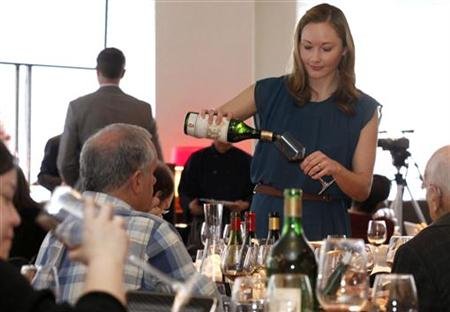 Fears of a Greek default roiling the world's markets and stubbornly high U.S. unemployment rates impacted the auctions. Unlike last season none of the houses sold 100 percent of their lots.

Despite the economic woes, Christie's set a record earlier this month when it sold 300 bottles of Chateau Lafite-Rothschild for $539,280 to a Chinese bidder, but the price was below the auction house's high estimate of $580,000.

Total sales for the Hong Kong auction were $7.6 million.

"These results confirm the passion of Asian clients for fine and rare wines, and indicate that interest in wine transcends fluctuations in the world economy," said Christie's head of wine for Asia, Charles Curtis.

Cases of 1982 Lafite Rothschild, a wine that frequently trades at auction, saw its prices rise as much as 40 percent in four months of the year. But it "has now found its range," Kapon said.

Another indication that the bubbles may be leaving the fine wine market is the latest report from Liv-Ex, the benchmark indices for wines. The Liv-ex Fine Wine 100, which represents the movement of 100 of the most sought after wines, was down 4 percent in August.

Joe Marchant, who heads the Bordeaux Index 100, another benchmark that tracks the 100 most frequently traded Bordeaux, also noted a drop in activity in August.

He said for the first six-months of 2011 turnover had been very strong. "But in August it seemed flatter. It seemed to be the same as last year (2010)."

Sotheby's will hold another sale in London on Wednesday and Hart Davis Hart will have one on Saturday in Chicago. In Hong Kong this weekend Acker Merrill & Condit will hold an auction and Spectrum Wine Auctions has scheduled a two-day sale in Hong Kong for the last weekend in September.