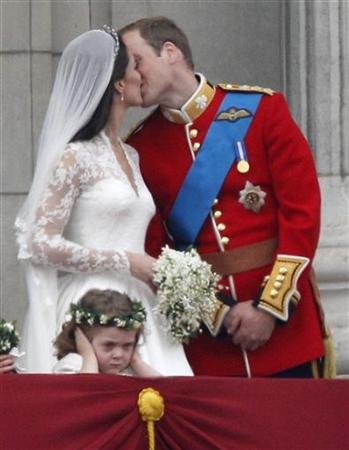 Britain's Prince William and his wife Catherine, Duchess of Cambridge kiss as they stand on the balcony at Buckingham Palace with other members of their families, after their wedding in Westminster Abbey, in central London April 29, 2011. REUTERS/Dylan Martinez

NEW YORK (Reuters) - She has graced countless magazine covers and dresses sell out hours after she has worn them, but experts at New York Fashion Week say Britain's Kate Middleton is a style follower, not a trendsetter like her royal spouse's late mother Princess Diana.

Middleton has been compared and contrasted with Diana, whose style, charity and scandalous divorce from Prince Charles made her arguably the world's most famous woman.

When Middleton married Prince William in April, hundreds of millions of people around the world watched on television, eager to see the wedding dress designed by Sarah Burton for the British label Alexander McQueen.

Then during the a visit by the couple to Canada and the United States in July, all eyes were on Middleton's wardrobe.

"If you take Kate out of the royal family, put her on a street in New York, you wouldn't look at her twice. She's a beautiful woman, but she blends into a crowd," he said.

While experts debate her fashion status, they say there is no question that the new Duchess of Cambridge and wife of the person second in line to the British throne is influential.

"Is she a style icon of the likes of a Kate Moss? Absolutely not. Is she in the public eye? Are people going to become obsessed with everything she wears regardless of what it is? Yes," said Elle Fashion News Director Anne Slowey.

A blue Issa crossover knee-length dress that she wore when her engagement to William was announced sold out within 24 hours and cheap knock-offs vanished almost instantly.

And the cream "Nannette" gown by British fashion retailer Reiss, which Middleton wore in the official engagement portraits, sold out several times over.

"Is she iconic at the moment? Time will tell. She's certainly influential. In the position that she's in you can't be simply stunning as she is and not have influence," said Neiman Marcus Fashion Director Ken Downing.

While more polished lady-like looks have been shown at New York Fashion Week -- such as evening wear with sleeves -- some experts were not expecting to see many styles on the runway inspired by Middleton.

Almost 100 designers are showing collections for spring/summer 2012 to retail buyers, media and celebrities, with dozens more showing at other venues around the city to coincide with the semi-annual event, which ends on Thursday.

"She seems to be starting to experiment a bit, to try some different looks and some different designers which I like to see but also still remaining thoughtful and appropriate in her choices and that's the key to her success," she said.

Jill Martin, author of "I Have Nothing to Wear!", described Middleton's style as classic. "I think this spring you will see many brides walking down the aisle in dresses with sleeves and that will pay tribute to Kate," she said.