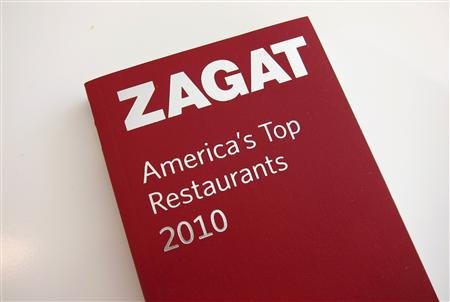 OpenTable is already reeling from financial results that have disappointed investors this year and the departure in May of CEO Jeffrey Jordan, who joined venture-capital firm Andreessen Horowitz. Jordan remains chairman.

Pitz said expanding into reservations would require extra steps such as building out reservation software and getting restaurants to install it, as well as building different relationships with the restaurants.

"It's apples and oranges," he said.

While much of Zagat's content is free and available to anyone, some content remains behind a paywall and it was unclear if Google would remove it.

Founded by Tim and Nina Zagat, the eponymous service provides the familiar burgundy pocket-sized guides to restaurants in more than 100 cities. It may be one of the earliest forms of user-generated content, Google Vice President Marissa Mayer said in a blog post on Thursday.

Zagat gave Google a tongue-in-cheek rating on its home page on Thursday, awarding the Internet company a maximum 30-point rating for its "local, social, mobile and usefulness" categories. Industry analysts regard the local, social and mobile markets as some of the fastest-growing areas of the technology sector.

Zagat enlisted Goldman Sachs to explore a sale as early as 2008, although no buyers emerged in the middle of a recession. The company might fetch as much as $200 million, it was reported at the time.

In late 2009 Google was in talks to acquire Yelp for at least $500 million, according to news reports at the time, but the deal fell apart.