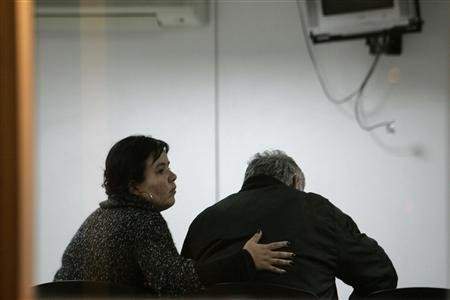 Relatives of people on board a plane, which is presumed to have crashed near Juan Fernandez islands about 420 miles (670 km) off Chile's coast, gather at an airforce base in Santiago September 2, 2011. REUTERS/Victor Ruiz Caballero

SANTIAGO (Reuters) - A Chilean air force plane with 21 people aboard was presumed to have crashed in the Pacific Ocean on Friday after it disappeared near the remote Juan Fernandez islands, authorities said.

Defense Minister Andres Allamand said the CASA 212 military plane tried twice to land before it went missing in the late afternoon. He said search teams were heading to the area, but that nightfall was hampering efforts.

"I empathize with the anguish and uncertainty of the relatives of the 21 passengers aboard the plane which is presumed to have gone down," President Sebastian Pinera said. "This is a very hard blow for our country."

TVN national television said five of its staff members were among the passengers, including popular presenter Felipe Camiroaga.

The crew was planning to film a report about reconstruction on the islands, which like Chile's mainland coastline were battered by a tsunami triggered by a devastating earthquake that hit Chile early last year.

Captain Otto Mrugalski, who is directing search and rescue efforts, said no remains of the plane had been found around the Juan Fernandez islands, which lie about 420 miles off Chile's coast.

Felipe Paredes, who staffs the control tower at the landing strip, said he saw the plane struggling to land and cited heavy winds and sporadic rain.

"When the plane was blown off course by the wind, it managed to pull up again," Paredes said. He said he then lost sight of the plane.