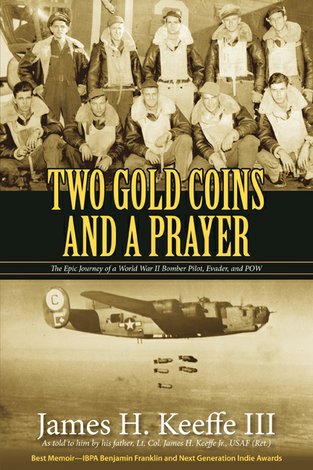 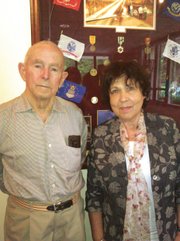 James Keeffee, Jr. and Helen Berman-Cohen were reunited through a book about Keeffe’s experiences during WWII

“There I was standing on the ground in enemy occupied Holland. I had just bailed out of my crippled heavy bomber and had no idea what had happened to my crew. I was hungry. I’d had only two hours of sleep in the past thirty-six hours. My face was smeared with mud and blood. And I was just four days away from my 21st birthday.”

Lt. Keeffe was clever enough to evade capture, but he vividly remembers seeing the boots of a German policeman going door to door searching for him near the small town of Papendrecht. Hours later, an almost comical encounter with a Dutchman, a German sympathizer in whose tool shed the downed American was hiding, leads to five months of friendship and help from members of the Dutch Resistance.

Lt. Keeffe’s life enters an odd, almost peaceful limbo as he evades capture as a secret guest in a series of brave citizens’ homes. The Underground creates false identity papers for Lt. Keeffe, labeling him a “deaf and dumb” basket maker. So, unlike many he encounters in hiding, Lt. Keeffe is able to go out and about in wartime Rotterdam – as long as he doesn’t speak!

The story of the resourceful pilot unfolds with one twist of fate after another. The airman’s determination to return to England and rejoin the Allied air battle leads to a double-cross that lands him in the infamous German POW camp, Stalag Luft III.

James (Jim) Keeffe’s war stories fascinated his sons who finally convinced him to “tell all.” James Keeffe III spent nine years documenting his father’s memories and the result is Two Gold Coins and a Prayer - The Epic Journey of a World War II Bomber Pilot and POW. The award-winning book tells the story of how the former Bellevue City Councilman and Air Force Lt. Col, now 88-years-old, survived being shot down over Holland in 1944 and how he made his way back to his family in Seattle.

But the story doesn’t end there. Last month Jim was reunited with Helen Berman-Cohen of Israel, who traveled to Bellevue to visit the Keeffe family. Helen was 8-years-old when Lt. Jim Keeffe was smuggled into the apartment of a Rotterdam dentist and his wife, where she and her parents were hiding in the attic.

After the book about his father was published, the author tells of an email he received that “sent shivers up my spine.” It was from the same Jewish family’s daughter, Helen.

“I’ve found this book a few days ago at the internet. I am the little girl from the Cohen family who was hidden together with Jim at the Jappe-Alberts family.”

“Imagine my surprise!” said James. “All my dad knew about the Cohens at this point was that they had eventually been captured by the Nazis, who also shot Dr. Jappe-Alberts and sent his family to prison.”