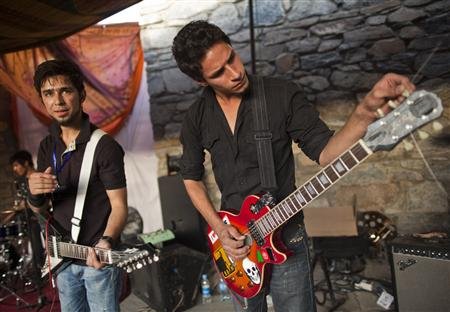 KABUL (Reuters) - Live rock returned to Afghanistan after three long decades on Saturday as young men and women cheered and leapt into the air to the sound of heavy bass beats and punk rock.

Bands from Australia, Uzbekistan, Kazakhstan and Afghanistan served up a six-hour musical feast of blues, indie, electronica and death metal to hundreds of fans, many of whom had never seen live music before.

Sound Central was something new in a deeply conservative Muslim country where music was banned under the austere Taliban regime. Even now music shops are attacked in some cities and musicians taunted for their clothes or hair.

The festival retained a distinctly Afghan accent, with alcohol banned, kebabs the only snacks and a respect for strong religious values amid the rock and roll.

Bands left the stage and the microphones were turned off twice in the late afternoon to allow the call to prayer to sound out uninterrupted from nearby mosques.

"Where I live, there's nothing like this. I heard about it so I had to come," said Ahmad Shah, dressed in a traditional white shalwar kameez and waistcoat, who traveled from Kandahar, a southern city roiled by insurgent violence.

"I came to escape the cancer of the Taliban and this makes a refreshing change." Violence is at its worst in Afghanistan since U.S.-backed Afghan forces toppled the Taliban in 2001.

Young Afghans lunged toward the stage, jumping and thrusting their arms into the air to the sound of local band White Page, and the handful of security guards were overwhelmed.

The crowd briefly parted when one man in jeans and a tight t-shirt took to the floor for an impromptu burst of back flips and break-dancing.

The festival was held under tight security in a corner of picturesque Babur Gardens, a normally tranquil park surrounding the centuries-old tomb of Babur, the first Mughal emperor.

The date and venue was kept a closely guarded secret until the last moment to ward off the chance of an insurgent attack.

Despite the secrecy, the concert attracted more than 450 paid-up revelers and scores more trickled in from street markets outside. A few elderly men with turbans and long beards appeared taken aback, but not entirely disapproving.

The crowd's enthusiasm persuaded even security staff and police to join in, nodding and moving their legs in time with the beat.

Tears of the Sun, now recording their sixth album, said they were surprised by the event's success.

"We didn't expect this crowd -- it's amazing, such energy," Ablyaskina told Reuters. "We love Kabul, more and more every day and we'll be coming back again, of course."

Guitarist Nikita Makapenko said: "Rock and roll will change the world, and we hope it will change Afghanistan too. This is historic, and it's just the beginning."

Sound Central was the brainchild of Travis Beard, an Australian photojournalist who joined a band when he moved to Kabul and was inspired by the talent and dedication of local musicians.

In the run-up to the festival, he held workshops to nurture the local talent showcased by Sound Central, and underground concerts to build the buzz and help bands rehearse.

The festival seemed to have served his goal of not just providing a day's entertainment, but kindling a love for modern music among young Afghans.

"We heard about the music festival from the radio, and when my friend asked whether we should go, I said 'Why not?'," said Lauria, a 19-year-old university student dressed in a bright headscarf, jeans and strappy sandals.

"This is great. I hope we can see more of it in Kabul," she said.