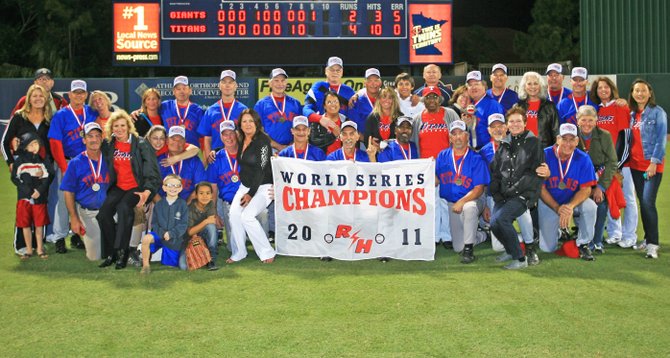 The Titan's 55+ team has won the top-level Legends division for 6 of the past 7 years (placing 2nd in 2009 and first in the other years). This year there were 39 teams playing in 3 different competitive levels. For the 2nd consecutive year, Bart Waldman was the winning manager, assisted by Greg Martin and Marlin Appelwick.

John Olerud, Sr., whose namesake son played for 17 years in the major leagues, is one of the Titan catchers. He's pictured with his wife Lynda (right), mother Alice (center) and sister Cathy (left), who were among many families and friends supporting the team. Photo courtesy of Lynda Olerud.

Other members of the Titans 55+ team are Glenn Kost, Wes Lewis, Jim Lopez , Randy May, John Moelhman, Steve Myers, Rick Nasci, Mark Patterson, Glenn Powers, Steve Rapkoch, Rich Seiler, Doug Springford and James "Amigo" Wright. (Players on the 55+ roster but injured and unable to participate were Marse McNaughton and Charles Jeffers although Marse was able to play for the 60+ team a week later.)

For the past 23 years, the Roy Hobbs Tournament has been held annually from mid October to mid November in the Spring Training facilities of the Minnesota Twins and Boston Red Sox as well as other Lee County Parks sports venues (all 90 foot bases) in Ft. Myers , Florida. Men and women aged 25 and over from around the world play in the 4 week long tournament.

From May to September most of the Titan players participate in the Puget Sound Senior Baseball League for men and women ages 21 and over. For information on adult and senior baseball, visit www.pssbl.com and www.royhobbs.com.

WHY THE WASHINGTON TITANS WIN
(A wife's perspective in poetry) 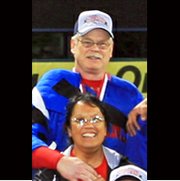 Helena Reynolds (pictured here with her husband Dave) is a free-lance writer and is in her 22nd year as a Parks Program Coordinator for the City of Kent Senior Activity Center in Kent, WA.

My husband's a pitcher and plays first and third
Now that he's referred to as "Gramps"
Our Washington Titans teams, Legends and Classics
are both Roy Hobbs World Series Champs

So what does this Washington Titan's wife do?
She watches those masses of games
She has thoughts on what helped the Titans successfully
earn all 8 titles they've claimed

They're talented, strong and extremely hardworking
They're in shape and strive to build muscle
Their personal egos are blended to one,
they're committed to "team"… and they hustle

"How Ballistic Base-Running Could Force a Fumble"
The theory is simple to show
A fielder, surprised by a hustling Titan…
…may be forced to hurry his throw

"Easy Play," "Can 'o Corn" are the terms for sure outs
"Run it out!" the coaches all shout
But some players dawdle while heading to first…
… expecting that they'll be thrown out

In every case, after hitting the ball
a Titan base runner expects…
…that he can out-run any infielder's throw
by b'listically running like heck!

It might cause a bobble, an error, a drop
in football they call it a fumble
It may cause a wild throw or possibly worse…
…it may force a fielder to tumble

And if he, by chance, takes his eye off the ball
to see why the crowd is absurd…
…that routine fly ball may just sail out of reach
while the Titan base runner rounds third

Another huge factor in Titan's success are
our wives and significant others…
…and fans who join in with our own families:
our siblings, kids, fathers and mothers

In closing, this poetic effort extends
beyond baseball for this Titan’s wife…
…discov’ring why Washington Titans are winners
combines baseball lessons with life!

© 2011 by Helena Reynolds  Used with Permission