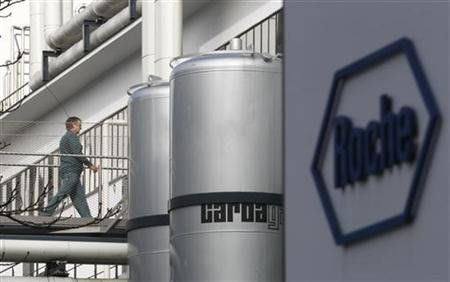 A worker makes its way on a bridge at Swiss pharmaceutical company Roche plant in Basel February 2, 2011. REUTERS/Christian Hartmann

"I am alive due to Avastin," said 66-year-old Patricia Howard on Tuesday. "I'm a wife, mother, sister, aunt and granny. I'm not just a statistic. It's in your hands to make sure I don't become one."

Patient testimony began the rare two-day meeting to hear Roche's appeal of the Food and Drug Administration's proposal in December to remove the breast cancer indication for Avastin.

At least 40 patients held signs and chanted outside the FDA building on Tuesday, wearing pink T-shirts with the slogan "We are statistically significant."

At the same time, some medical experts cautioned that the FDA should not undermine its own credibility by endorsing a drug when new research showed it was not significantly effective.

For Switzerland-based Roche, the FDA decision could shave almost a billion dollars off Avastin's more than $6 billion in annual sales. Roche shares were little changed on Tuesday.

During the hearing, Roche unit Genentech is expected to argue the drug should be kept on the market pending new studies that show a more significant clinical benefit.

For patients, an FDA rejection of the appeal could mean insurance companies would stop covering the expensive drug for breast cancer, potentially jeopardizing treatment for an estimated 17,000 women currently using the medicine. Breast cancer is the second-leading type of cancer among women after skin cancer.

The appeals panel is expected to make its recommendation at the end of the hearing Wednesday. FDA Commissioner Margaret Hamburg will make the final decision.

Avastin won U.S. clearance for breast cancer in 2008 based on a study showing the drug stalled cancer growth by 5.5 months. As part of an accelerated approval, the FDA required Roche to run follow-up studies to confirm the drug worked.

Later studies found only a one- to three-month delay in breast cancer growth. None of the studies showed Avastin extended the lives of patients with advanced breast cancer.

Some patients also had severe side effects, including holes in the stomach and intestines, severe bleeding and blood clots. The company says the incidence of these serious side effects was just under 3 percent greater for those taking Avastin.

In December, the FDA proposed revoking Avastin's clearance for breast cancer while keeping the drug on the market for colon, lung, brain and kidney cancers.

Genentech has been fighting the decision, saying the extension of time without cancer growing was meaningful for patients with advanced breast cancer. At that stage, the disease cannot be cured and the goal is to stabilize patients as much as possible.

Some argue that if the FDA keeps the breast cancer indication solely to placate patient groups, it would undermine the integrity of the accelerated approval process.

"If the FDA demonstrates that it is unable or unwilling to withdraw accelerated approval when the totality of evidence fails to meet its standard for regular approval, such a precedent risks undermining ... the agency's credibility as it seeks to regulate medical products for the public good," said a perspective article published in the New England Journal of Medicine on Monday.

Stripping the breast cancer indication for Avastin would not prevent doctors from using it. But without FDA approval, insurers may refuse to pay Avastin's $8,000-a-month price tag. Genentech would not be able to promote Avastin for that use.

Most analysts believe the panel will not change its mind, especially as five of the six members voted against Avastin's use in breast cancer at a hearing last July.

Medicare, the U.S. federal health insurer, is likely to cut coverage for Avastin in breast cancer if the FDA revokes that use. That could shrink U.S. sales by half in 2011 to $400 million, said Karen Andersen, analyst at Morningstar.

But she sees a 60 percent chance that private health insurers would still keep coverage for Avastin on an off-label basis.