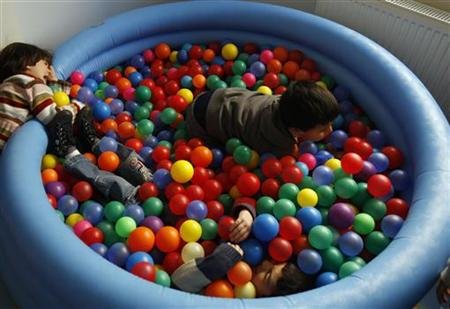 Autistic children play at the Consulting Centre for Autism in Amman, March 30, 2010, one of the few places in the country that helps children with the condition. The world will mark World Autism Awareness Day on April 2. REUTERS/Ali Jarekji

LONDON (Reuters) - Researchers studying autistic toddlers have discovered their brain activity appears to be out of sync at a very early stage -- a finding that sheds light on the biology of the condition and may help in earlier diagnosis.

In research published in the journal Neuron, scientists in Israel used functional magnetic resonance imaging (fMRI) to look at the brains of sleeping toddlers and found that certain types of neural activity are disrupted in autistic children but not in typical children or in others with delayed language development.

"What we looked at is how the activity is synchronized," Ilan Dinstein of Weizmann Institute of Science in Israel, who led the study, said in a telephone interview.

"And we found that the synchronization was different -- specifically in toddlers with autism and across the hemispheres (of the brain) in areas related to language and communication."

Autism is a complex and mysterious brain disorder usually first diagnosed in early childhood. It is characterized by difficulties in social interaction, communication, and understanding other people's emotions and behavior.

Autism disorders are diagnosed in up to one in 100 children in the United States and Europe and affect four times as many boys as girls, but the condition is very often misdiagnosed and doctors are keen to find biological measures to help pinpoint diagnosis and make it more accurate.

"There's a tremendous amount of misdiagnosis in many different forms," Dinstein said. "A child that might seem autistic at one and a half years old may turn out at three years old to have language delay or some other developmental disorder. So one of the reasons to look for a biological measure is to clarify the issue of diagnosis very early on."

The human brain is split into two separate hemispheres, which are mostly symmetrical in terms of anatomy and function.

Dinstein explained neural activity continues even during sleep and in a typical brain, normally correlates to certain patterns. Scientists believe the strength of synchronization between functionally related areas in the right and left hemispheres may be a measure of how well the brain is working.

Their results showed a specific abnormality in synchronisation between two brain areas commonly associated with language and communication in 70 percent of toddlers with autism, but only in a handful of the typically developing toddlers or those with language delay.

Dinstein said that as a potential diagnostic tool, this biological measure was "a first step."

He said another useful aspect of this measure was its ability to be taken during natural sleep, bypassing potential problems of getting a very young child to cooperate with a test.