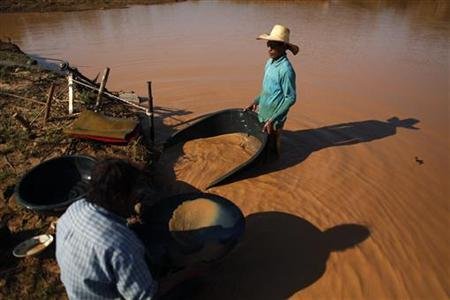 People pan for gold in Panompa near Phichin in this February 17, 2011 file photo. REUTERS/Damir Sagolj

TOKYO/BANGKOK (Reuters) - It has been called the saint-seducing metal, with good reason.

As the price of gold rests near record highs, people from Spokane to Bangkok are selling jewelry or buying bullion, some are giving up steady jobs to take to panning while theft of gold chains and watches is on the rise worldwide.

"Some people I know are making hundreds, even thousands of dollars on the weekends."

Locals say rising prices and heavy rain earlier this year are leading to a surge in amateur prospectors, looking for flakes of gold washing up on river-beds.

Spot gold sells now for $1,830 an ounce, up nearly a third this year. With currencies and stocks faltering and prices of other commodities held back by slowing economic growth, the frenzy for gold has gone global.

Many are cashing in on the gold they have at home -- or on gold teeth -- although the trend is slowing in the belief prices will rise further.

"The most disgusting thing I had to deal with was a rotten tooth with a gold crown from a customer's grandmother who died," said Munehiro Otsuki, the manager of a gold store in the Shinjuku district of western Tokyo.

He also had a customer seeking to sell half a dozen Buddha statues which he had thought were gold, but were in fact brass.

"When I called him this week after the evaluation, I could tell by the way his voice changed that he was extremely disappointed. He never came back."

At another store in the Kanda district of Tokyo, manager Kenta Okiyama spoke of a middle-aged woman dressed in brand-name clothes, the smell of her expensive perfume wafting across the store, who poured 30 rings of varying designs out on the table in front of her.

She told Okiyama these were rings she had received from ex-husbands and boyfriends back in the heyday of the 1980s, Japan's free-spending "bubble economy" era.

"We did not even think that my old gold accessories were worth anything before we saw news about people selling their gold on TV," she said. "If gold prices rise more, I'll look for more accessories in the depths of my closet."

But experts say sales of recycled gold will rise only about 5 percent this year, against 30 percent in 2009. "Either people are waiting till the price hits $2,000 or they are running out," says Mariabi Peenya, a street side dealer in New York's Diamond District.