CDC urging all Americans to get flu shots 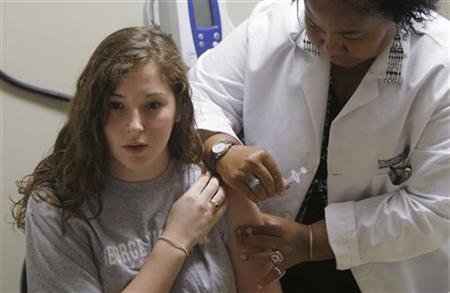 CHICAGO (Reuters) - For the second year in a row, health experts are urging all Americans to get a flu shot, even though the circulating strains of flu have not changed since the 2010-2011 flu season.

The U.S. Centers for Disease Control and Prevention said on Thursday the recommendation applied to everyone over 6 months of age -- even those who got flu shots last year against the same flu strains.

This year's vaccine protects against H1N1 swine flu and two other flu strains called H3N2 and influenza B.

The CDC said it was possible that immunity provided from last year's flu shots -- which included the H1N1 pandemic flu strain -- may have faded.

The new recommendations from the CDC's Advisory Committee on Immunization Practices, which were published in the agency's weekly report on death and disease, also cover Sanofi's newly approved Fluzone Intradermal vaccine for adults aged 18 to 64.

The vaccine, which uses a short needle and delivers the vaccine into the skin rather than the muscle, can be used as an alternative to traditional vaccines.

Eventually this season, the CDC officials said, the five companies that make flu vaccine for the U.S. market expect to provide 166 million doses of vaccine. That compares with 157 million doses distributed last year.

"There is plenty of vaccine for anyone who wants to get vaccinated this year," Dr. Carolyn Bridges of the CDC's National Center for Immunization and Respiratory Diseases said in a telephone briefing.

Children aged 6 months to age 8 who are getting a flu shot for the first time will need two flu shots -- given at least a month apart -- to build up immunity, according to the CDC recommendations.

But children in that age group who were vaccinated last year will need only one flu shot.

Separately, the CDC released data on two studies looking at vaccination rates among healthcare personnel and pregnant women that suggested the CDC had more work ahead convincing people to get flu shots.

In one study, conducted by the CDC and the RAND Corporation, researchers saw only a slight increase in the immunization rates of healthcare personnel to 63.5 percent in the 2010-2011 flu season from 62 percent the prior season.

Doctors and hospital workers had the highest vaccination rates, and mandates made a difference. Among the 13 percent of those surveyed who said their employers required them to get a flu shot, 98 percent had been vaccinated.

A second study of vaccination rates among pregnant women found 49 percent had been vaccinated during the past flu season, about the same rate as during the 2009 flu pandemic.

Pregnant women and their babies are at higher risk of severe flu complications. While the study showed no gains over the prior year, researchers were pleased the same level of coverage was achieved after fears of pandemic flu had subsided.