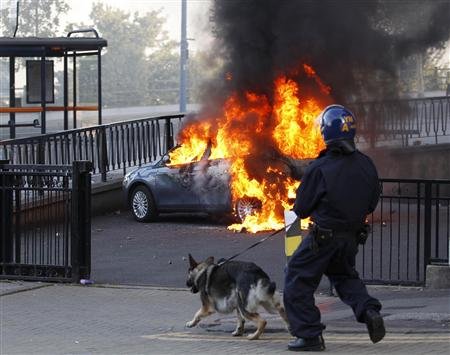 A policeman and his dog walk towards a burning car in central Birmingham, central England August 9, 2011. REUTERS/Darren Staples

By Mohammed Abbas and Jodie Ginsberg

LONDON (Reuters) - Thousands of police prepared to deploy on London's streets on Tuesday night to head off the rioters and looters who had rampaged through parts of the British capital virtually unchecked for the past three nights.

Commuters hurried home early, shops shut and many shopkeepers boarded their windows as the city prepared nervously for more of the violence that has flared in neighborhoods across London and spread to other cities. Police promised to nearly triple their deployment on the streets.

The first violence of the evening was reported in two towns in central England: Wolverhampton, where stores were raided, and West Bromwich, where cars were set alight. Disturbances were also reported in Salford, near Manchester.

Community leaders said the violence in London, the worst for decades in the huge, multi-ethnic capital, was rooted in growing disparities in wealth and opportunity.

Gangs have ransacked stores, carting off clothes, shoes and electronic goods, torched cars, shops and homes -- causing tens of millions of pounds of damage -- and taunted the police.

But Prime David Cameron, who cut short a family holiday in Tuscany to deal with the crisis, told reporters:.

"This is criminality pure and simple and it has to be confronted and defeated."

"People should be in no doubt that we will do everything necessary to restore order to Britain's streets," he said after a meeting of the government's crisis committee, COBRA.

Another such meeting was set for Wednesday. Cameron also recalled parliament from its summer recess, a rare move.

Cameron said 16,000 police officers would be on the streets on Tuesday night, compared to the 6,000 out on Monday night. London has a population of 7.8 million.

The unrest poses a new challenge to Cameron as Britain's economy struggles to grow while his government slashes public spending and raises taxes to cut a yawning budget deficit -- moves that some commentators say have aggravated the plight of young people in inner cities.

It also shows an ugly side of London to the world less than a year before it hosts the 2012 Olympic Games, an event that officials hope will serve as a showcase for the city in the way that April's royal wedding did.

"This morning was a dark morning to wake to in London. No one should wake in this wonderful city of ours to see such scenes of devastation and violence," said Metropolitan Police Deputy Assistant Commissioner Steve Kavanagh.

Police arrested more than 200 people overnight and a total of 450 over the three nights, filling the city's cells to capacity. More than 100 police officers were injured.

A 26-year-old man died after being shot in Croydon, south of London, the first fatality of the riots.

Many Londoners feared another night of trouble. Sales of baseball bats and police batons shot up more than 5,000 percent in the last 24 hours on Amazon's British website.

In Hackney, scene of some of the worst rioting on Monday, groups of yellow-vested police were visible everywhere.