On Fathers and Halibut Cheeks 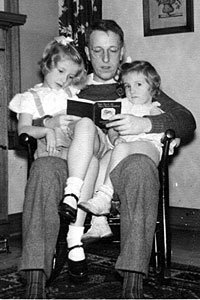 I frequently converse with my father about the meaning of life, and trivial things-how could he eat tripe, vote for Dewey, or fall for that art dealer's story about the twelfth century scroll. The dialogue is in my head because my dad died more than forty years ago. I am now ten years older than he was when we had our last real conversation.

When he was alive, of course he was wiser than I. He was more than three decades my senior. I imagined myself on a wisdom track that would never catch up to him, like some athletic competition where I was starting many laps behind, and sought his opinions about many things-my choices of college classes, political candidates, world events, and even, once in a while, my friends.

For the first thirty years or so after his death, I cautiously dipped my toes in the cold waters of his factual existence and found some pebbles, even stones, of imperfection. He spoiled his children, overprotected his wife, and fell for strangers' hard-luck stories. But I still kept him on a pedestal. It wasn't until a few years ago, when I ordered halibut cheeks at a restaurant, that I realized I had failed to take into account my own age and wisdom. I wanted to like the halibut cheeks because he did, but I loathed them. My father's opinions had nothing to do with me anymore.

I realized that I had failed to age him, the way they do on milk cartons for lost children. If he were still alive, he would be asking for my help. Maybe I would be advising him with his investments, reading the fine-print newspaper aloud, or extending an arm to guide him stumble-free down the street. I have become his peer and then some, knowing lots of things he never dreamed of-how to download songs onto my iPod, pump my own gas, repair things with a hot-glue gun, pay bills electronically-and other assorted complexities of the twenty-first century.

So now, in the conversations I have with him, although he still doles out appropriate advice when needed-like not applying brakes in the midst of a curve, or the need to crush rosemary before adding it to sauce, and checking for the UL label on small appliances-I have begun to boss him around a bit, albeit gently. I've convinced him to vote Democratic and when I'm at a restaurant I order whatever I like-the crab cakes or the prime rib. And once in a while, when he offers his opinion, I retort, "Nope!," in the loudest inner-voice I have, and love him no less for it.

This article appeared in the June 2007 issue of Northwest Prime Time, the Puget Sound region’s monthly publication celebrating life after 50.